I hate my pens

All my pens died on me at the same time. My Rotring, my Kohinoor, the lot.

So now I am back to dipping crow-quills in a bottle of ink.

Laying out a final version of An Insupportable Light. Going to put it up at Lulu. I've cleaned ALL the pages -- over 1500 of them -- of The Desert Peach. Then I'll post two versions, at Lulu and through Amazon and my site. Copies of all the 600 dpi bmp files will be send on CD's and DVD's to the San Diego State University Special Collections.

And when I'm done with that, I can get back to some serious writing. The problem with comics pages is nobody but the artist can really do final versions.

AGGGGGH. Maybe I can get it all done before I'm dead.
Posted by Donna Barr at 8:44 AM No comments:

The last post on Cricket described hopes for her rescue.

She's found a home! But it Took A Village. Through the efforts of four households, this very nice dog will be sent to a five-acre property, owned by a couple, with two kids.

Remember this? Cricket got away again, and has been running around the neighborhood. She dragged the elk bags out from under our neighbor's porch and made a nest. The neighbor has begun to feed her -- and now they want her. They're trying to get in contact with her owner. Keep your fingers crossed for Cricket. Burn incense and say prayers and stuff.
Posted by Donna Barr at 9:15 AM No comments:

This is the trip to the Emerald City Comicon.

Before I took off on the bus, took a beach walk. It's officially summer, because Dan and I can both wade the Clallam River. Way down there at the end? We're right behind the edge of the trees, to the right of the white buildings -- the former lighthouse keeper's house, before the Sheriff's office had the lighthouse and walkway yanked down "for safety reasons." 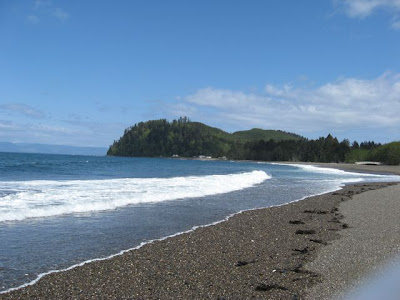 Lake Crescent on the Way. I got from our place to the Bainbridge Ferry for $4.50, using city busses. I've written an article for it for the Peninsula Daily News, but if they don't use it, I'll be posting it at Associated Content, for those who've asked how to do it.

Yes, this is how part of my bus route looks: 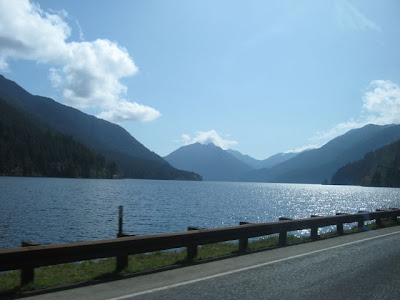 Didn't have a booth or artist's table at the con, so shared space with Keith Curtis. Why Crater On The Moon was the coolest booth at the show. Review of COTM at Associated Content.

Will be posting a review of Jobnik -- the only book I could find during a solid hunt through the whole show for a review target that had its own voice and vision. Everything else was pretty, but pretty cookie-cutter; been there, read that (how sad is that?). Come back later this week for a review.

Stuck around after the show to visit folks and see neat things.

Sunday night after the con, at Hidmo, the Eritrian Restaurant. This be a vegetarian platter. Yum! They have music, too. 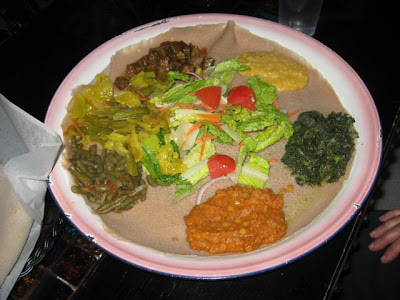 The Kubota Gardens. The pond is part of several built along a naturally-fed creek. 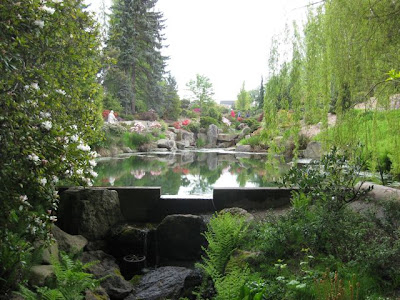 The Great Wall in bloom -- Steve Gallacci in his back yard, before his vertical garden. Steve and Bear (his Giant Pomeranian Used Dog) drove me back home Tuesday, where we all watched his DVD of Rattatouille.

Dude. Peter O'Toole as the food critic. Really getting off on being the Bad Guy -- he rolls his RRRs and snarls and hisses. 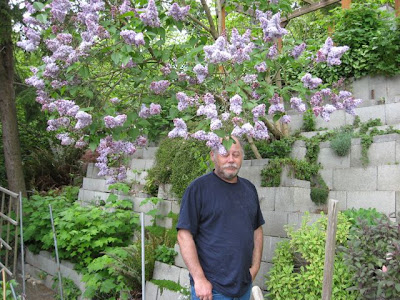 Posted by Donna Barr at 9:04 AM No comments:

Off To See The Wizard

Remember, I'm at Emerald City Comicon this weekend. I'm going to be there Saturday for sure, and probably Sunday.

I'll keep a stack of books at CNW president Keith Curtis's booth; I'll also be taking shipping orders for print-on-demand or Everything Boxes.

I'll mostly be on the floor, schmoozing retailers. Or back in the snack area, writing. Ask Keith for my cell number; I'll have the talkbar on during the show.

And of course, I'll be signing for Prism sometime during the show.
Posted by Donna Barr at 12:31 PM No comments:

I finally did it.

I bought a Wacom tablet.

Found a nice deal on one at Circuit City, online (googled for price). The online recommendations were all delighted by the thing. No-battery pen, more sensitive, paper-like surface appealed to this old-fashioned artist.

After spending a year scanning, cleaning and re-working over 1500 Desert Peach pages for the big collection, as well as getting the final pages ready to ship to San Diego State Special Collections, I have had it up to HERE with paper. Besides, it's just getting more expensive.

I'm looking forward to this new toy.... I couldn't resist the teensy four-port USB hub, either. I am a teeny technology freak. Two of my fav purchases recently were a tiny computer mouse and a miniscule radio antennae -- both very inexpensive, with cheap shipping -- that do a great job. The smaller the better -- and now all my LED lights are color-coordinated.

And I get to deduct everything.
Posted by Donna Barr at 5:36 PM 1 comment:

"Down There In The Hole."

A serious 8-page story got away from me last night. It decided it wanted to be much longer -- while saying the same thing -- but funny.

Old friends are going to show up, as Pfirsich's giddy delight in being invincible pisses off his new friends and frightens his old ones.

I have no idea where this is going. It's like the good old days, getting yanked around by my characters.

S/M for the working writer.

(This may be partially due to the freshly-made chocolates Dan brought home. Fresh, milky caramel centers and dark chocolate shells somehow brittle, yet smooth and powdery. I froze them, and am allowed one a day.... I do adore me chockies froze.)
Posted by Donna Barr at 5:31 PM No comments:

I'm in THIS. This little mini anthology series has been going on for over a decade. I've contributed to most (if not all -- I'm not sure!) all the issues.
Posted by Donna Barr at 5:28 PM No comments: