Life of a Writer

I don't think my newspaper editors care if I'm a subversive as long as they know they can send me tearing out into the storm to get any weird crime story that happens out here. Or lose my mind writing down all the paper-of-record numbers at some awful community-development meeting; I would literally rather stand in the icy, pouring rain than listen to a bank manager drone on (I've done it; I can compare). I'm a amateur stringer --- I don't know no better.

Creative people are crazy. You have to kill us first to make us stop writing or drawing or making baskets. But sooner or later we have to admit we have to make choices, and if we want to continue to create, we have to back out of other things. The books and pictures and woven things come first.

NOTHING hurts as bad as the migraines that I had all my life and are now GONE!!!! I don't know why; they used to cripple me, but now they've just disappeared.
Posted by Donna Barr at 9:22 AM 1 comment:

Answering Questions (Not Under Torture)

Nice interview with me at ComixTalk.

Interviews are GIGO: you don't have a good interview unless you have good questions.
Posted by Donna Barr at 8:52 AM No comments:

This is just us at home, watching on the MacBook (with a cooling fan). Stuff my readers might enjoy, but that's about as far as it goes.

What were YOU doing during Inauguration 2009?

I'm going to be putting up a better, more considered article at Associated Content. And another video at YouTube. I don't believe the 'net has to be the first panicky rough draft. We got time to think and savor, because it's going to be around a long time, not used tomorrow to wrap fish or compost.

And there are a LOT of people out there with the good stuff, right on the spot. Don't expect deep political thought; I'm even going to comment on the scarves.
Posted by Donna Barr at 9:58 AM 2 comments:

The Writer's OTHER job & The Inauguration

This is me playing (PLAYING) journalist: LINK

Huh. I finally get a job and it's print media.... why don't I just take up braiding buggy-whips?

Sitting on the couch in pj's, while the stove-top oven heats for cat-head bisquits, and back on and eggs (special breakfast), watching the inauguration on the web.

Who needs tv?
Posted by Donna Barr at 6:46 AM No comments: 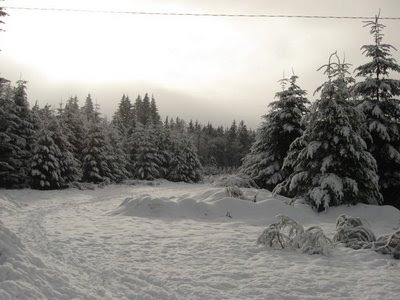 Our gold roses were still blooming when the storms hit. I headed the blossoms and left them on the snow: 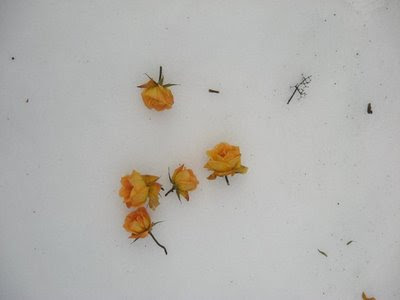 On January 18, there was barefootin' at the Clallam Bay beach (Clayton Bannon and Damen Ringgold). That's Canada there in the background, with snow. 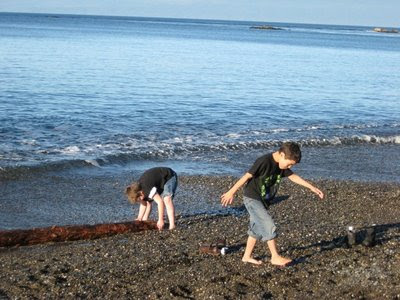 Posted by Donna Barr at 4:34 PM No comments:

In return for a couple of reviews on GoogleBooks, one of you Speedies got this wolf, which took me about 30 seconds to sketch, a minute more to scan and a half hour to fiditize (fiddle with/digitize). Imagine what you could get for a Twitter campaign..... 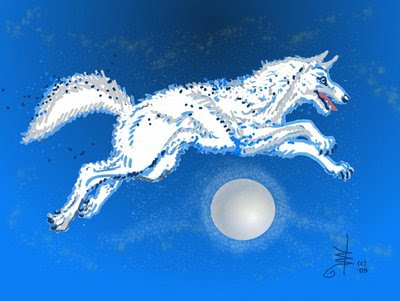 In return for whatever you want me to commission to draw or paint (any media, including pixels, cuz now I got a Bamboo):

Go to Google Books. Search my name. Do everything you can to add more cover art, details, reviews, whatever.