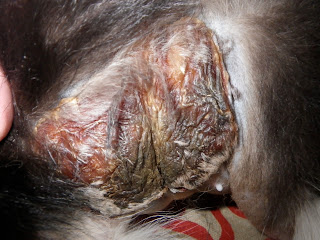 The burn is dry, and doesn't smell.  It's beginning to granulate and sluff away.  The vet was quite happy with this photograph of the healing burn.  It's on his white belly, so it probably won't even change his hair color there.  He goes in next week to get the final checkup on his stitches and removal.
His system now rejects extra fat, which means he doesn't need it any more.  He needs protein.  So it's lean meat next.
And I had to chase down his smart-alecky butt today to give him his meds.
Posted by Donna Barr at 11:45 AM 1 comment:

Price's Exam and The Fatness

Price went to the vet Monday.  His burn is healing under the scab, which is acting as a bandage.

He was prescribed skin antibiotics, to start as the gut antibiotics are finishing.  We have a little diazapam to encourage appetite and assist with sleep, if need be.  And a little mild opiate, if needed for pain.

Forks Outfitters's butcher gave me a fist-full of beef fat for our boy.  He ate four quarter-size mouthfuls on the way home.  Fat to be converted to vitamin C to heal faster.

The vet said Price would be sloughing the scab.  Today I found him beginning to clean the scab off, revealing bright-pink skin underneath.  Yes, I know the scab is made of himself, but EWWWWW.
Posted by Donna Barr at 5:17 PM 1 comment:

Price had been in such pain, so miserable, so uncoaxable with his food.  His burns looked like bacon.
Last night, he was standing by the kindling pile, face-marking. Dan later saw him  sink his claws into the cat-tree and dig at it, straining his whole body backwards on his hind legs, in a way that looked painful, but that he obviously wasn't bothered by.
This morning, suddenly -- he got up and followed me around until I fed him.  I made him get out of the way during the wood-loading -- so he cornered Jim (the new/low cat) and smacked him.  Later, when Jim was complaining because now he is House Cat and doesn't get let outside to beat up the neighbors any more, he stopped and hissed at Price.  Price sat down and gave him, his "Yes?  Do you need another one?" look.
Maybe... I don't want to jinx anything, but thank all of you for the Love-Voodoo for Price.
Posted by Donna Barr at 10:54 AM 4 comments:

Price Up And At 'Em

The boy gets fed every hour on the hour, with anything high calorie, although he wants the canned food with all the added vitamins, minerals, and Taurine.  Fish, chicken, milk, mayonnaise, whatever he'll eat - doesn't matter.  He doesn't get any of the shellfish, in this case mussels, because healthy humans handle those better than sick kitties.

Twice a day, Dan puts on heavy leather gloves, and I wash his belly down with a solution of nettles, dill and catnip, then apply antibiotic ointment.  He gets antibiotics for his gut resection three times a day.

We should all hope we get treated like this when we're sick.

Looking up Chinese herbs for helping with the other tiny tumors that were found in the ultrasound.  Price had a low-level facial tumor removed about 3 years ago.  He was found in a parking lot in 1998, as a half-grown boy.  And we're living in Clallam Bay -- an industrial forestry area.  We might as well be living with pulp mills.
Posted by Donna Barr at 1:04 PM 8 comments:

ARGGHH!
Why the Robert Newton imitation?  Because Mr. Price (General Sterling Price) was just doing fine with his bowel resection surgery.
Why the horrible-looking belly discoloration?  That he whined so miserably about when I tried to look at it? ("Oh no!  His gut has burst!  He's rotting!")
He fell asleep on the low setting on the heating pad.
Yep, they really can burn us like we've always been warned.  So after another 60-mile round trip, and a mindset that had me considering Cutting and Dan throwing up waiting for the news, we found out he's just fine, just needing some ointment and aloe or honey or dill washes to clean him up.
Hope this really jump-starts his immune system, like the Southerners claim of a springtime sunburn does in the winter bugs.  Yeah, that's what it's good for.  All three of our little lamps warm up nicely at low wattage, so he's buddying up to them, now.
And thanks to all of you for the power wishes and care; couldn't have done it without you.
Posted by Donna Barr at 12:04 PM 4 comments:

Price ate and ate this week, but couldn't seem to gain weight.  He's healing from an operation that opened up his whole belly.

Today, he stopped wanting to eat.  But he has his own couch in the guest/comics room, with layers of afghans and a black woolen shawl, a heating pad, a selection of food, antibiotics and Dramamine.

We should all have it so good when we're approaching the end. 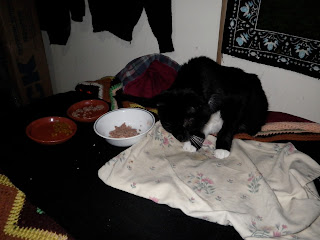 I'm not saying he is -- we're not giving up -- but we're done dragging him around on the highways on cold rainy days to get to doctors.  He's home.

If the Ring of Fire is unzipping anyway, it's as good a time for us as any.  We wouldn't even have time to run out the back door and up the hill.

The Desert Peach on Kindle

Readers praise the few copies of The Desert Peach up on Kindle.
Those were processed and posted by my agent, Dave Baxter.  It's interesting one reader simply downloaded the book to read on his computer.
Posted by Donna Barr at 2:27 PM 1 comment:

So I googled.  Price has a weird thyroid level.  I'm keeping this to email to our vet on Monday:

Took a look at his meds -- he got a small amount of thyroxine.

He's stopped eating today; only took a lick of mayonnaise.  He's so thin, so very thin.  His wound is healing well, but he's so thin. 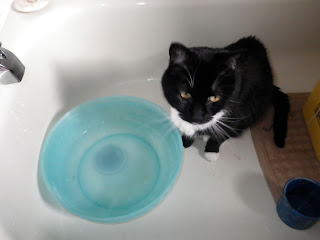 Price in the bathtub, drinking soapy water from the bidet bowl.  Maybe he needs the soap to knock back the tumors.
Price purring on his cat bed.  He came home today.  The vet could only get him to eat tuna -- until he saw his own canned catfood.
Now he's lying in front of the woodstove, sucking up the heat.  He's still passing blood, but that's to be expected -- he had a lot of blood vessels cut.  The gut that was removed should have been the size of a man's little finger, but was two inches across, it was so crammed with the feces he couldn't pass.  The vet said he'd never operated on any animal so ill.
We hope we get to have the old guy a bit longer!
Posted by Donna Barr at 7:40 PM 3 comments: 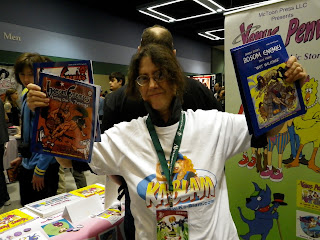 First of all, our cat Price is in hospital and stable, so that was a load off my mind.  He's eating and drinking, hopefully he'll start healing soon.
(Left) Me wearing my Ka-Blam shirt and showing the print-on-demand reprints of Bosom Enemies.  I ended up settling all the very nice proof copies on Prism Comics, to go to Chicago with them.  A few of those are a bit odd -- as in: One Of A Kind.
Prism will be my show reps from now on -- and if I'm at a show I'll be in their booth.  They're looking for women comics authors because their customers are demanding books from women.  And, as Zan Christensen of Prism says, "The booth looks a little strange with just men." 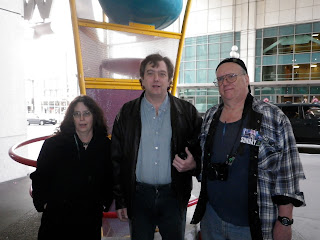 Met my oldest younger brother and Irish Twin, Don Colbert, for the first time in 30 years at the convention, and an old friend, Chris Clark.  (Me, Chris, Bud). 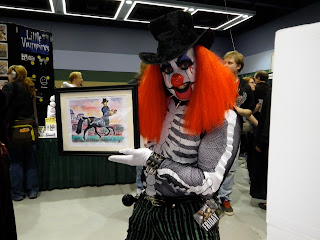 Cartoonist's Northwest's Scot Allan as the scary horror host clown, and my Stinz painting, available for sale.
Scot always had this insane English laugh, and when he's in this outfit, he's downright creepy.
The show was great -- I would have needed to be cloned to stop and talk as much as I wanted to with everybody, especially all the new and old friends and colleagues.
Posted by Donna Barr at 9:54 PM 3 comments:

Price Not So Cut Up

At this point, still worried if he needed surgery. Ya think?


Poor guy was in surgery or recovery all day.  Then was wrapped up in a blanket for the long drive back home.
Then the water main broke.  Oh, and Dan slipped on the ice on the porch this mornings; we're lucky he's only bruised.

I hope I can make it to Emerald City this weekend.

Good news: Price has recovered to the point he staggered back to the bedroom and got up into his comfort zone on the bed.
Posted by Donna Barr at 1:56 PM 5 comments: