Our cat Fearless passed away today. She was 16 years old. She was named after one of Hemingway's cat. She had a pretty good purr-purr, too. She went quickly, in Dan's arms.

She was one of the Potatoes, along with her brother Shadow. They looked and acted nothing alike.

They were two tiny kittens I rescued because otherwise their desperate owner and her baby would not get out of the cold and rain at the Bremerton Safeway, not until she had guaranteed both kittens had a home (which I suspect she no longer had herself).

One night, I saw Fearless on the couch with a shadow behind her. But it wasn't a shadow - it was her brother. And so he was named.

We called them both The Potatoes because, as I was dealing with groceries and keys in the parking lot, in the other hand I held them both, upside down, and their tiny bellies - the grey kitten's nearly pink -  looked like two potatoes. Now Shadow will be The Potato.

Fearless would yell at us every morning for breakfast until she was fed. it's sadly quiet at meals, now.

Fearless was a good cat. We're glad we had her, and we're glad we still have her brother.

Posted by Donna Barr at 3:35 PM No comments: 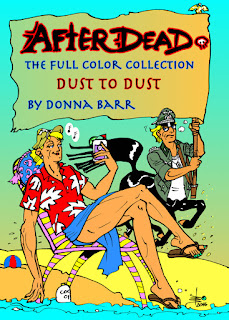 Last chance for anybody who wants to do a blurb for Afterdead. You gotta be a working Creative, and you got to add your name and what YOU do. Here's the cover art.
Posted by Donna Barr at 9:36 AM No comments: