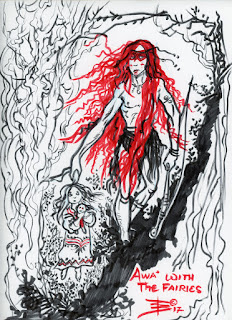 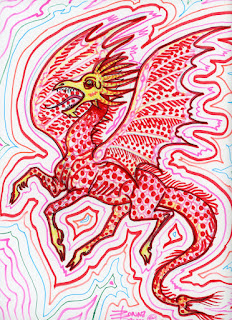 While sitting at my table, between customers, panels and events, I do art for myself. Here are a couple examples, a Red Glowing Dragon, and "Awa' with the Fairies."

When I'm just doodling freehand original art like this, if you walk up with $50 cash, you'll be able to buy any sort of art like this, easy. So if you have ideas of what sort of doodles you'd like to see me doing, let me know. And because we all have Square, now, but it seldom works without 20 minutes trying to get connected, you bring your twenties, I'll bring my ones, and we'll do it the old-fashioned and easy way.

And you get publishing rights with any art you buy. This means you can share it any way you like, as long as you don't manipulate it or get money involved. Personal cards and postcards are fine, so long as you don't sell 'em.

A couple years ago, the Dean of Special Collections at San Diego State University had invited me to lunch.

I finally arranged a trip, with Roberta Gregory, to have that lunch, and to get Roberta's work into the Special Collections, too.

Since I was going anyway, I was assisted in finding a San Diego convention to attend, to make the trip even more worthwhile - especially for southern California fans who'd been asking Roberta and me for years when we'd be back to a show. Pam Jackson of SDSU found us the San Diego ComicFest

(I take this opportunity to thank everybody - because there were so many of you!)

The lunch was such a success, and the subsequent tour. Soon, SDSU will be able to offer to students and the public Roberta's lifetime of fabulous art and comics. In the course of the SDComicfest, we hooked up other artists and writers to be included in the convention. Overall, a very successful meeting!

Now for the comics fest: It's a small comics show, in a small hotel - and an absolute gem.

The artists' alley was chock-full of artists solving their own artistic problems, and very little fully genre work. And actual authors - the people who have a single-vision comic and do it all.

Comic Fish Studios had me in for a surprise teaching moment, where I taught the class how to write, draw a horse, and hold a comicon like mine. Thank you to all the students and their teacher!

The party room was fun, the funny superhero drinks names, like the Kirby Krackle, were tasty but dangerous (kudos to the junk food, despite the horrible French Fries). Roberta Gregory, and Phil and Linda made it even more enjoyable.


Chinese dinner on the first night, with a table filled up with old and new friends. 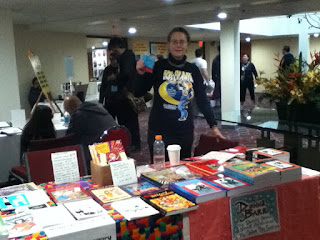 Of course, I wore my Ka-Blam T-shirt, at least part of the time, so folks would know who do the best - well, really the only - almost-traditionally-priced print-on-demand floppies.

They're as close to perfect as you can get in this industry. And if the price is a buck more per book compared to the '80's, the quality is ten times better, color or black and white.

We had lots of fun with big paper-mache and fiberglass animals on the floor, including a T-rex head, with which everybody was getting photographed being gobbled up.

A giant tiki head loomed over the central lobby floor, and a King-Kong head and hand gave everybody the opportunity to act like they were endangered Fay Wrays.

Roberta Gregory and I were featured at a panel in which we discussed our life's work, and I auctioned off the remnants-constructed Nasty Woman Pussy Hat. Here's our winner!

Huge thanks to Anina Bennett and the technical staff for making our little thumb drives work with computers and projectors. And thank you, Anina, for leaving a rose on the table I shared with Roberta Gregory. So thoughtful!

Roberta and I ended the convention with a dead-dog party in the hotel bar, where missing ingredients and a helpful bar-keep named Mike reconstructed a modern version of the sticky old Desert Peach cocktail.

The new and much less sweet version is (in a big wine glass): A shot of Drambuie, a shot of peach vodka, top it up with champagne or other sparkling wine. Many straws let lots of people sample it safely. It was voted a winner. Thank you, Four Points Sheraton!

Hi, folks! I was commissioned to do a Pussy and the Brain hats for a fine fan and his wife. I had leftover yarn.

So I made this Alley Pussy hat, the ears of which don't match because the yarn was different sizes.

I'll give it away at a lottery at the panel at the San Diego Comicfest, Monday, 11:00 am, room Palm A, with Roberta Gregory and Anina Bennet, among others.

And we did, and here's our winner!

Posted by Donna Barr at 8:29 AM No comments: