This will probably be my last Norwescon (other obligations!), so I hope to be bringing some fancy costume pieces to give away.

Look for these at a room gathering - probably Friday - that will include readings. Look for my name on the flyers. First come, first served. They're yours if you want them. I won't save any - you have to be there to pick them up and wear them.

Sunday I'll have a cool beaded gown I'll be wearing Saturday, carrying it over my arm Sunday AM. First one wants it, gets it.

AND a nice black coat with a twirly snake braid all across the shoulders, front and back..

I thought tabling a comicon was hard. Try promoting a comicon on the whole floor for four days! In this case, the second annual RainCon, also known as "The Sequel."

Thursday, I talked individuals into each taking one of an inch and a half of RainCon flyers. I thought I was done, but the promotion went on and on. Sunday afternoon, I was still hooking up people in the beer garden. I am now completely out of business cards. I think the show will be getting a wheelchair and "disabled" cosplay group (although I hesitate to use the word about any cosplayers, who are about as able as they come).

I'm afraid I put most of the photos for this show up on Facebook, but I retained some IMPORTANT ONEs. Like the college roommates in "Wicked." 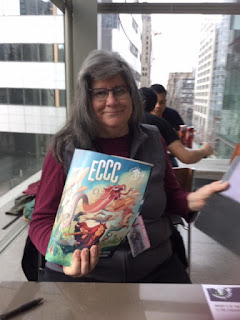 Here's Roberta Gregory, on the first day of the show, at our organization-and-coffee table, where we figure out where we'll be all day, just before we split up to go running around the hamster maze that is the Seattle Convention Center. Every year I have to relearn that thing.

Next year, I'm planning on using this time space for San Diego Comics Fest. A lot of my old friends and colleagues are in San Diego - of course - and I need to drop in and see them once in awhile, as well as take care of my substantial and loyal fan base.

Of course I'd think a picture of me in the beer superhero photo frame is important. Or funny. 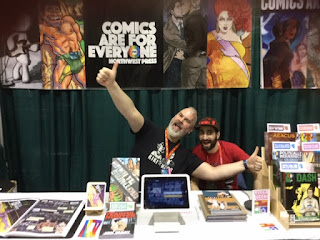 Northwest Press's Zan Christiansen is always good for a laugh. Here he is trying hard not to cover fellow booth babe Steve's face. We agreed that "LGBTQ" can be replaced with "BLT" in conversation, because we are tasty, greasy and salty.

Hearing that RainCon is featuring the LGBTQ community this year, Zan made sure I had plenty of wonderful books for the RainCon comic shop dollar box.

Before you think that's just being nice, we've discovered that the people in Forks - who have only ever known superheroes - will not only load up from the dollar box on authors they've never heard of, they'll show up at RainCon as a brand-new fandom for those authors. I'd very much advise contacting Evan Sveum at the Raincon website or on the Facebook Friends of RainCon pages about sending him some copies. Even dinged ones are welcome - and it's a great way to use slightly damaged product. At a $1 a pop, the fans will grab them.

Roberta Gregory and I had some good rest times when we could have something to eat and a beer. Like at Pequinoes, a nice Mexican place in Seattle. I don't think I've ever had better nachos. The IPA and Ale went down nice, too. A good break after running around ECCC all day.


We even got around to the WildRose, Seattle's wonderful lesbian bar - and one of its oldest drinking-and-eating buildings of any sort. And look at the brand-new mural!

Posted by Donna Barr at 2:19 PM No comments: 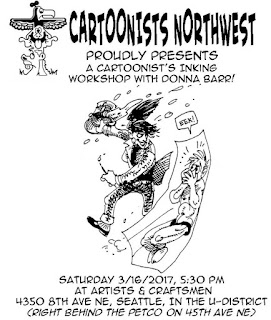 I'll be at Cartoonists Northwest during the 2019 Emerald City Comicon. Saturday, March 16, 5:30 pm, at Artists and Craftsmen Store, 4350 8th Avenue NE, Seattle, in the U-District (right around the Petco on 45th Ave. NE.

We plan to lay down a big piece of butcher paper of such, and have me draw all over it.

Why lay it down?

SO YOU CAN JOIN IN. Once I get it started, you'll have an opportunity to draw your characters interacting with my Bethlehem folk. Will it be the end papers of the comic? We shall see.