Of course, there are a lot more pages with great photos from Seattle's 2015 Pride Parade, but here are mine, from my IPod. My selfies were the best ones, so you're stuck with me. I haven't included moments with friends, just a general report.

I threw myself out of bed in Clallam Bay at 2:00 am on parade Sunday, and headed East at 3:30. It was still dark, and the sun was only hinting a rise as I headed into Port Angeles an hour later. The sky was red and orange and purple and blue and apple green. At Port Angeles, Mount Baker stood out dark purple against orange. At a rest stop on the east side of town, the sun suddenly topped the trees. I turned to look and saw the forests and mountains colored with sunlight bands of gold, pink and yellow. Everything was Rainbow.

I raced another three hours and a 1/2-hour walk, all the way to the Bremerton ferry. Which filled up with people in their sparkly best. It was like the WTO and anti-war marches, when Bremerton sent its population over to join in. But this time, there was much more joy, and better costumes.

The Dykes on Bikes led the way of course - the Women Came First.

Remember when there were about eight of them in the parade, and about two businesses - and both of them bars? And the whole parade took about 20 minutes by Volunteer park?

This time, the businesses and city organizations that showed up made it look like a really fun economics summit. Police, firefighters, sheriff's department, T-Mobile, Starbucks, you name it. Everybody was there. Even the handful of Fundy Haters were wearing glitter and holding up fancy signs; they couldn't help themselves.

I cheered and waved for an hour and a half. Then I had to take a break, wandering down to third to grab a bowl of pho at my favorite little Vietnamese-food shop. After a lot of chicken soup, hot peppers and purple basil, I stepped out onto the street to hear that the parade was still going in.

Hoping to catch up with some of the entries I'd missed, I followed the parade to Denny - quite the feat, ducking around happy celebrants, their dogs, and the food booths and beer gardens. At the end of the parade route, I found an open curb and sat down and enjoyed the rest of the parade, for at least another two hours. WOW.

Favorite moments: the very cute black Seattle policewoman in her blues and bill cap, looking quite sexy and so happy she could burst, interacting with a crowd that just wanted to hug her.

Sheriff's department deputy overjoyed to walk down the street in her uniform with her loved one's hand in hers.

Funniest phrase announcing an entry (the mopeds that followed the BOD): "Vaginas on Vespas!"

As for level of shouting, music and general hoo-hah, I couldn't hear a note from the smartly turned-out Seattle Police Pipe Band. I never thought I'd actually witness a pipe band drowned out.

Most surpised: saying "Happy Pride" to three cops and finding out I was the first one to say it to them.

Funniest moment: when the cops, directing vehicles from the end of the parade separate holding area from pedestrians, directed the pony players to prance their cart after the trucks and school bus and fire engines ("It has wheels. It's a vehicle").

Best refreshment: the Episcopal Church's bread and wine at the end of the parade (very nice grape juice and a wonderful chewy, crusty sweet bread). Yes, I drank from the general chalice. Friends can tell you I'll get myself in trouble Joining In The Experience. Nothing but happiness, this time.

I'm sick and exhausted and I have a blister between my toes, but I don't care, I was there. Happy Pride!
Posted by Donna Barr at 4:57 PM No comments:

Talking about the coloring-books-for-adults trends over on Facebook. People said we should post pages for coloring. So I'm posting this one, from Afterdead. Download and/or print and color away!


Then send me a bitty jpeg or link so we can admire. AND CHANGE THE FILE NAME IF YOU SEND IT TO ME. So I don't replace and erase mine by accident.

I hearby give you permission to use or share your colored version any way you like, so long as you tell me, and add:
Donna Barr © Actual Year.

The page is about the long-dead Peach, accompanying the extremely-wounded pilot/teaching aide he's care-taking, to visit the pilot's girlfriend, who is GeStaPo - and therefore, of course, a Vampire. Don't ask why the Reich made that a qualification. It's probably on a par with the State law that makes it a crime to keep an elephant in a basement - somebody did something stupid, or something seemed more convenient.

Explanations welcome. I sometimes think my characters talk to my readers more than to me. Are you buying them beer??
Posted by Donna Barr at 9:32 AM No comments: 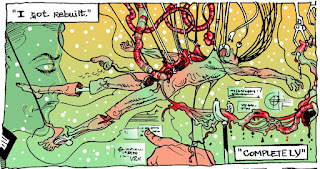 Now coloring the formerly black-and-white pages of Afterdead, on ComicFury.

One of the gamer-favored moments of the old days when I was first starting out, illustrating Traveler, was a graphic depiction of removing bits of shrapnel from live intestines.

This panel is the descendant of that illustration. Now in color.

I just realized, seeing it in the small form, that it looks like a map.
Posted by Donna Barr at 8:35 AM No comments: