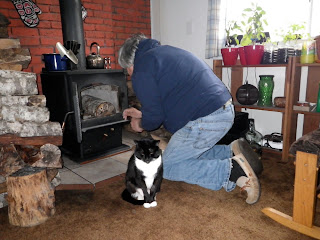 It's spring and sometimes we feel we don't need a morning fire.
Price has other ideas.
We just live here.
Posted by Donna Barr at 10:31 AM 4 comments:

Price On The Run

Since people have been asking how Price is feeling, a couple days ago he slipped out the door like a snake.  The neighbor got to laugh at Barr TV as we ran like mad baboons trying to catch him, twice around the truck and then heading him off -- barely -- before he slipped under the house.

Yesterday, when Leo came back from a heavy tooth-cleaning, and was lying half-drugged in front of the stove, Price was the only one not to be afraid because he smelled like the Mad Scientist (kitteh word for "Vet.").  Price stalked over to Leo, rubbed his head with his, and then licked his head.

Dan says Price has been to the Mad Scientist so much lately, his sense of smell has blanked the place out.
Posted by Donna Barr at 8:32 AM No comments:

Prowlie and Jazz -- the Interview

A Fan at DeviantArt is asking me questions and agreed to let me post the answers.  Interviews are like programming:  Garbage In Garbage Out.  Ask good questions, get good answers.  Ask stupid cliché questions, see what you get.  Our friend here asks good ones.  But you kinda have to know the series to understand some of the questions.  Go to The Desert Peach.

Oh, and if you like her page, tell her so!
S:  Couple of questions about the (DeviantArt DesertPeach) group. Are there any groups here on DA you'd like to affiliate with? Also, would it be ok to use some of your Peach art to make the group banner with?
D:  You can do whatever you want. Remember, I released my stuff for anybody to draw, write or sell what they produce, as long as it's not my original stuff. Yes, I pulled a Roddenbarry.  If you want to use my art for a banner, that's Fair Use.

D:  Nobody can write or draw 'em like me. Why shouldn't I let them play with them and get paid for the effort? As long as they tell everybody where they got the stuff and link 'em to my sites (as a courtesy) I'm pretty happy.

S:  And did Rosen mean his passion for Peach had died, or passion in general? Cause he sure was oogling them roller derby girls.

D:  I have no idea what the rules for passion in the afterlife are. Rosen sounds like he's getting a break from his.

S:  Started reading Afterdead. I gotta admit, you put Peach in some sexy outfits, and with the black remembering fingernails, it makes him look goth-yum! But why didn't Udo's turn black when he remembered Peach?

D:  In the final pages, before I published them on paper, the fingernails were corrected for Udo.

(S. asked why, in the original book, Winzig put Udo on the train to Siberia, after Udo had saved Winzig earlier from being shot by the Americans.)

D:  Udo got caught between Winzig's honesty and grief. NOT a good place to be.  And Winzig didn't know his life had been saved.  He was pretty wrapped up in the girl, at that point.  He really is one of those people with severe tunnel vision.


S:  (Re the episode where Winzig puts Udo on the Train:)  What's honesty and grief gotta do with sending a dude that kept you from being shot by the Amis to Siberia? Winzig reminds me so much of my TF2 Medic Gustav.

D: People are all a little nuts at the end of a long war.  And you know what they say about the Forest and the Trees.

S:  And I'm STILL trying to figure out why Rosen went along with the whole Babette thing. If Peach became straight, he wouldn't want Rosen anymore... Though seeing Udo and Rosen fight over who got to hold the baby was hilarious.

D: Because Rosen is an oversexed fuckhead pilot.

S:  Why'd you stop doing Peach? There's still so many things to be said and done! Or was it one of those things, you decided it was time to loan them out to the fans and see what they do with them?
D: I said a lot of them in Bread and Swans. And they continue in AFTERDEAD.

S:  And I'm confused about the whole owning copy write thing Peach did on Georg. Does that technically mean Georg is owned by Peach? And why did he do that? To take care of him? And how can a dead own a living? My head hurts...yet I am intrigued.

D: That's from earlier AFTERDEAD -- and I gotta post all of it to Indyplanet or something, other than on Amazon, 'splains that. It's crazy and complicated. Don't worry about it. It just means he can annoy the hell out of Georg.

S:  Oh yes, and my friend wants to know "Why Rosen is such an irresistable asshat?"
D: We've all had toxic candy in our life, haven't we?
S:  I has more of them (questions).
D:  Is we alls gon end up wis LolSpeak? :)

S:  What are those half-human/half-horse things in Afterdead (like Hans)?  I've been reading AFTERDEAD and I'm unclear as to what they are.  Are they sentient like a human, or a pet or horse or what?  How did they come to be?

D:  Those are from "Bosom Enemies" -- another series I'll be running like The Desert Peach and Stinz.

D:  They're sentient.  I think their status is kind of like service horse.  Like Swiss horses -- all Swiss draft horses have to spend 3 years in the army.  They "belong" to the little horse-headed people.
I don't know how they came to be.  In BE, they're made from humans.  But BE isn't AFTERDEAD.  I think of my characters as actors -- "Casting Call!  Looking for any characters willing to be in this story."

S:  Also, I remember the episode "Invites" where Hans seemed to have a crush on the roller derby pivot.  Would that be acceptable if he were to act on it?  Kinda wondering if they'd consider that bestiality, considering he has a horse dong.

D:  In the Reich, nobody intrudes on anybody else's sex life.  If it's Consenting Adults (the emphasis on "Consenting") it's nobody's business unless you want it to be.  They don't control people through sex in that society. They have other little ways.

D:  In the old Black Manuscripts stories, they're descended from rebels who were made into animals.  They're used to bits, and being ridden on, like we're used to clothes and shoes.  We're all domesticated, one way or the other.
I have a costumer friend who raises goats. She runs around her farm barefoot.  Her poor feet are shod with a layer of hard, horny skin NOTHING can get through.  Same thing with the hands of these horse things.
When I write other things, I don't think about MY life, I think about THEIR lives.  What's weird to me is common to them.
Posted by Donna Barr at 8:27 AM No comments:

Price -- Many thanks to our good neighbors

I need to thank a neighbor for allowing me to talk her out of a couple of pounds of fresh local meat for Price.

The vet said he needed protein, and this was the most high-quality protein I could think of, and the closest to mice; a mouse is to the antelope family what the rock hyrax is to the elephant: the closest living relative.  Closest  to the natural diet without setting mousetraps (then again, I think the maple tree having 81% of the same DNA I have is very close and very cool).
We've been feeding Price a 1/2-mouse-load of ground flesh an hour, following it with enough of his dry food to bind up the fat in his digestive system so it doesn't give him runny bowels.
Price has laid on a layer of flesh, and his fur is soft and gleaming.  He's still thin, but he's not scary desperate thin.
Price's recovery is very much due in large part to their priceless generosity.
Posted by Donna Barr at 10:32 AM No comments: