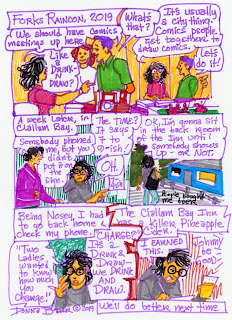 Tip your barkeep
Posted by Donna Barr at 2:13 PM No comments:

The Forks RainCon - The Sequel - was bigger and better. Sorry I didn't get more photos! There was just so much going on.

Here's the whole crew of staff and vendors. We should include the cosplayers, duck and all! 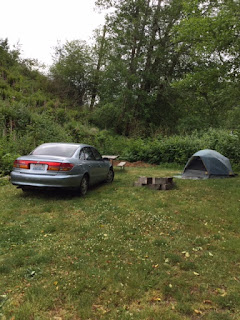 Leading off, I was the first person to attend a comicon from a campsite. Forks Highway 101 RV park was lovely. Inexpensive, friendly, full restrooms and showers. And all excited about being part of RainCon next year. It's right across the street from the Thriftway, that opens early for coffee and breakfast snacks.

Turns out other folks were staying at campsites around the area, too! We truly are a rural comicon.

Because I'd been building a fan base in Forks by leaving dinged backstock in the dollar box at Jiggerbugs Comics - the store that runs RainCon - I had plenty of sales for Print On Demand Collections.

I advise anybody who has dinged backstock or goodies to get some to Jitterbug. Go to RainCon.com or Facebook Fans of RainCon to connect with owner Evan Sveum.

The convention is still small, but this year it was looking more like the first San Diego Comicon. Much higher attendance, with folks from as far away as Portland, Oregon.

Clallam Bay Comicon vet Jake Richmond was there, running one of the games. He and his family fell in love with Clallam Bay, especially the Winter Summer's Inn, the river and the beach, and he still wants to vacation there. Clallam Bay would very much like to see any of the comics world come up to visit and enjoy the area.

RainCon and the Sequim Opttacon are unusual in that comics and gaming are going on in the same floor space. Doesn't seem to cause a bit of trouble. Just adds to the atmosphere and fun!

RainCon will make fewer amateur mistakes because I've been in comics and conventions for 30 years, and can help the crew and attendees not reinvent the wheel. I'm happy to do it - I want RainCon to be my convention headquarters from now on.

Rain of Terror's fun gang was there, selling hotdogs, hamburgers, and Italian sodas and spritzers, to raise funds for the very scary LaPush Hallowe'en haunted house. Yes, Forks will use the word "rain" wherever it can, for whatever it can.

Of course, LaPush is werewolf central in Twilight, so our Quileute friends have the scary for the West End covered!

I've already told Evan I want a table for next year. I'm not missing a single RainCon.

And I'll be reserving my camping spot. This year, the archaeology lecturer brought beer to my campsite Friday night, and we sat around the fire, talking and laughing and having a cool one, until nearly midnight. Camping at a convention is a great idea!

With Comics Swap Meet in Chimikum in July, and Opttacon in August in Sequim, we have nerd representation going east.

My ideal: a comicon at Kalaloch beach hotel, one at Hoquium, a gaming convention at Amanda Park and Joyce, and a big multipurpose convention in Port Angeles. Inching closer to getting tribal artists and comics folks to come share their wares.

With conventions in Tacoma and Olympia, we've got the Olympic Peninsula surrounded. With all the Hawaiians we have moving into the area, if I can't get to the Hawaii Comicon - I can bring it to me!