Okay, finally got the painting projects done.  Back room done in a goldenrod I picked up at a garage sale.  I was surprised when Dan didn't want it mixed with a white base to lighten it.
When we got done it resembled a Chinese restaurant.  I had some gold paint, so decided to fix those big, empty closet doors.  Dan liked it so much, he had me do more on the blank walls with the north window.  Now it looks like a grove in here.  I was going to do small birds or doves, but we thought with the gold paint it was fancy enough.

It's just fast and freehand, but it is rather like reading in a grove before we turn out the lights. 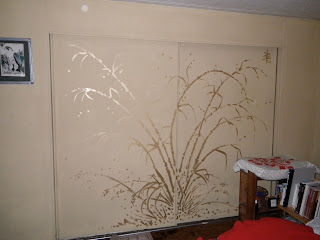 The last photo is actually of my hand-prints.  No, you're not supposed to touch the art, and on most pieces, nobody did.  But everyone was so driven to imprint hands and feet on these particular sculptures, it triggered a recording to "Please not touch the art." I began to wonder if, at least for this one sculpture, the inability to resist rebellion, despite the electronic warning, was part of a live-action participation piece.
Posted by Donna Barr at 1:59 PM 2 comments:

Okay, I'm not even going into the why or should for what The Huffington Post just did. when it sold its site  As usual, comics has been there first.
I'm just going to list examples.
There is ONE professional paper up here -- so far:  The Forks Forum.  No, not in its quality -- it's just a restaurant-and-post-office handout, and the editorials are a huge giggle (I'm blaming the publisher) -- but the editor pays my bills and covers gas money for jobs, and even asks for my bill if I forget (I got 6 hats up here, like everybody else).  And he doesn't even think of asking for rights.  Here's a clue, people; your rights belong to you are the default position.  Any editor who simpers, "I'll let you keep your rights" is going to be Paying You With Sunshine sooner or later.
I no longer work for The Peninsula Daily News. Partly because they don't do their research, have recently published gossip in place of a story, wouldn't listen to me when I warned them a story was very sloppy and Out Of The Mouth Of Neighbors, and promptly used it as an excuse not to pay me for the effort.  They never paid for THIS, either. Even though I kept telling the editor there was nothing in it, she insisted.  Not a $#!! penny came out of this.  Another time, she let our four-hundred pound forest ranger rant at me in public as an excuse not to pay.  She's left me to switchback down hills on foot through the woods, instead of contacting the pertinent parties and getting the !#$!! road gate opened.  I wouldn't be so pissed off, except covering this area and it's piddly stories is like being pelted to death by popcorn.  Those people owe me money, now, and the next time they call me, the rates are $200 per photo AND per article.  They can just pay their staff to come out here to get it.
We have a couple Huffington-level amateur papers, one run by a woman who takes ads and uses volunteer writers, and doesn't pay them.  Her kid paid me $50.00 for my first article in the paper he now runs, but that was the last article he paid for, once he found out what publishing bills look like.  You can imagine what those articles look like.   Her photographer once scabbed me out of a photo sales to KOMO TV.  Partly he's just iggerant -- partly they're just cheap.  But when he pigeon-puffs up to me and crows, "I scooped you!" that's the last straw.  You screwed me, asshole.  Where the sun don't shine.  Oh, and you're teaching your kid your values.  How cute.
I don't do that to the sports photographer up here; sports is HIS rice bowl.  He and I agree on what to cover at an event.  My Forum editor lets me come along on rides for other people, because he knows I'll cooperate with rides and finding things, too.
I only did one story for this book -- and I do good Yaoi.  The woman wanted full copyright -- for $150.00 a page.  Think of all the nice stories she'd have had from me if she wasn't trying to pull a Huffington in the future.
I don't get hired a lot -- because I won't work for free, I won't give up my copyright if it's mine, and I won't waste my time.  I've never written for Huffington, either, thank you very much.  The Forum editor's wife said he once told her about me, "It's nice to work with a professional."  Back atcha, guy.  Back atcha.
Huffington went over the edge of the argument WHEN SHE SOLD THE SITE.  She got money, everybody should get money.  As usual, capitalism only works when it uses cheap or free labor and/or resources.  If she's doing a demo of how capitalism works, I think our side knows how that goes already.  Will she be doing demos with cheap cull'd house servants and well-hung native poolboys someplace in the Caribbean soon?  To use another comics reference: " 'nuf said."
You want to see how it's done, Huffy?  Here ya go.  And don't even try to say you're a more professional or important editor than I am; I know that butt -- and its sunshine -- when I sniff it.
Posted by Donna Barr at 11:45 AM 2 comments: