All My Comics Online

The Desert Peach The Desert Fox's gay brother stays alive in the German Army and tries to keep other people that way, too.

Afterdead - all of Donna's Characters together!

The Black Manuscripts, courtesy of San Diego State University Special Collections. Who have my life's work on 40 feet of shelves - including a lot of juicy comics authors have swapped and shared with me.

WHERE AND WHEN WITH DONNA BARR

Posted by Donna Barr at 4:34 PM No comments:

With everybody thinking about growing at least some of their own food, I'm posting photos of my window green house.

If anything makes it, it goes outside in a couple plots.

The peppers are doing surprisingly well. I think these are from seeds one of my readers sent me.

The sweet potato is the one I used to clip starter sprouts from. 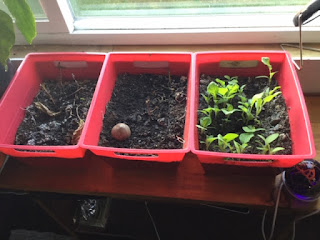 The black tomatoes are the continuing generations of tomatoes I rescued from a drie-out plant in a tiny plot at the edge of a small Capitol Hill park.

The avocado won't get much of a life. It's being grown for the leaves, that will be dried and ground for a kind of filé powder. It's related to sassafras.

Next to it is a plant I have no idea about. Another sent in by a reader probably. I'll plant any old thing, labeled or not.

The wild tobacco is mixed with leaves from alder, mint, coltsfoot and raspberry leaves. I have chronic bronchitis. Medicinal smoke helps keep my lungs from tipping into pneumonia.


The aloe is because we have a wood stove, and if you have one of those, you get burnt once in a while. Grabbing a leaf and squeezing the gel onto the burn sure helps.

It's not a lot of gardening. Most of that is masses of kale in the garden. We cook it in everything, for iron and calcium. Marinated overnight, it makes good salad.

It's about all I can grow up here without a real struggle. Slip point has a cold, dry, salty wind all summer, and is too wet the rest of the year.

Posted by Donna Barr at 3:15 PM No comments:

I know I've got a lot of information about upcoming conventions, but all of them are only possibilities at this point.

Like Emerald City, the folks who run these conventions are responsible people. They're monitoring the situation.

I expect Olympic Collectible Expo to be at least postponed, because it's in the Kitsap Mall, and is much closer to Seattle, the epicenter of the outbreak in the United States.

There is another event coming up in Port Angeles in early April - that I don't know if I can share yet - and they are monitoring as well.

AnimeKat (the Port Angeles store and nerd central) and OCE on Facebook are the best places to check out what might be happening.

So everybody stay safe, wash your hands, sanitize all surfaces. Let's get through this the best we can.
Posted by Donna Barr at 11:18 AM No comments:

The San Diego Comic Fest is a heck of a show!

Held at Sheraton at 4 Points in San Diego, it makes about 2000 people very happy. Everything about it is classic comicon.

First up is Pam Jackson, Pop Culture Librarian (She got to make up her own title) at the San Diego State University, at my table in the artists alley.

AND me in my Ka-Blam shirt. They are the best drawn-book floppy printer, and only about a dollar more per issue than '80's prices! High quality, friendly and helpful. You can't go wrong with the Blamster.

Diana Leto and I ran the "Girls Can't Do That" panel. We were told we had the panel only a week before. There was some scrambling, but we got our art files together, and with my moderator chops and Diana's tech expertise, the panel was fast and furious and funny. Audience member Buzz Dixon told us "this was the best panel" he'd ever attended, and took our picture. Mucho gracias, Buzz!

Mary Fleener did even better with the Underground Panel. Her, me, Roberta Gregory, Trina Robbins, Bruce Simon. QUITE the lineup. Again, well-organized, ran fast. At the end, an audience member threw a wad of cash at Mary and said, "Take everybody to dinner!"

That night we hit the Emerald Chinese around the corner from the hotel. The place was full of comicon folks. Drawn book people aren't racist OR stupid. Our table plowed through a mountain of goodies like savage badgers. It was so good!

Of course, folks show up for sketches. I did this little drawing of Stinz in a guy's book. And after 30 years, asked myself why a centaur would need a cane. Fashion, of course!

One of the best reasons for going to SDCF is to meet up with old friends and colleagues. Here we have Roberta Gregory and the Lustigs!

John is the creator of Last Kiss, an hilarious series based on old romance comics he bought the rights to and provides with smart-alecky word balloons. It's a big hit, and for good reason!

This year's theme was The Two Rays - Ray Bradbury and Ray Harryhausen.

There were crazy old movie posters all over the big panel room. Thanks to the volunteers who put in so much time making it fabulous!

Here we have Robert, on the surfboard of the RatFink installation. It's built of slats and chicken wire and cloth and spray plastic. 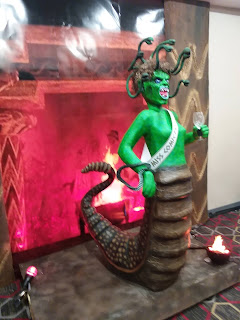 He also built this party-girl Medusa. Who else feels sorry for the Gorgon? She was just minding her own business when a guy showed up and cut her head off.

Robert gives her a Miss Comic Fest banner AND a glass of wine! She's one of the gang, now.

Here's Robert with an absolutely fabulous samurai warrior. A fully home-made costume. Cosplay amazes me.  These people turn out the greatest outfits.

The guy in the samurai costume makes a different helmet crest for each event. They're plastics - he must be running them off a 3-D printer. I wish I'd asked.

We can't have a comicon this year without the Spiderverse. This cosplayers's outfit matches the carpet! 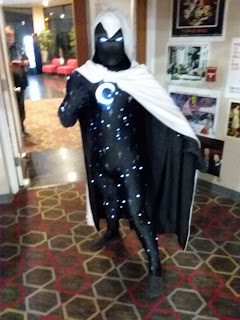 Finally, a starry character from a comic book I should know. Whatever it is, it's grand. It's covered with tiny fairy lights.

That's all I had time to photograph this year - there was so much going on!

If you get a chance, head to the SDCF. It's worth it.

See you next year!

Posted by Donna Barr at 3:31 PM No comments: