So You Wanna Be A Comics Writer?

The Clarion Group asked me to write an article about getting into comics. So I wrote it. They used it, but it's a lot shorter. So here's the rest of it. Oh, and they used a much prettier picture.

After a long San Diego Comicon, during the Sunday wind-down, a mother with a hopeful son approached me as a comics professional:

"My son wants to get into comics," she said. "What should I do for him?"

Pretty much wrung out after three days of marketing, I blurted, "Break his hands!'

Happily for me and her kid, they'd been around the industry long enough to recognize the reality of my comment.

Comics are hard work. They're probably the most labor-intensive art form we can successfully finish alone. The best way to get into comics, of course, is to learn to draw and write them from start to finish; that's what we call a comics author.

These days, with print-on-demand and downloads becoming simpler, cheaper and more easily organized, many comics authors are profiting quite nicely from the entire publishing process themselves.

Many people are becoming complete authors, but there's still a demand in the industry for the old-fashioned penciller/inker/letterer/colorer/writer team, especially in the old genre markets like superheroes and manga.

If you're going to write for comics, first of all attend a comics convention, the bigger the better. Look at everything and talk to everybody. Bring a big box of business cards, and no matter how good you think your memory is, write what your exchange was about, or both parties will forget it by the time you get home. There's just that much going on.

Hydrate, eat a good breakfast - you may get nothing more until supper - and learn to fish-swim through the rivers of fans (an art in itself).

Back home? Seen some books you want to write for? Learned who people are? Now it's time to get to work.

Think movie script. You're transmitting your ideas of dialog and images to another person. If you're writing licensed characters, it's like writing a Star Trek novel; you get pay, not the rights. On a comic book you get paid like the script-writer. The artist/s get paid like the actors.

The first lesson is: nobody's a mind reader. The second is: garbage in, garbage out. Artists come in at least two flavors; the ones who want you to describe every detail of every panel, and the ones who want to do the layout themselves. Too much detail just makes panels clunky. And you have to leave space for word balloons. Get some comics, and check out basic layout.

You want to become a writer for a publisher? Learning a genre and submitting scripts is the same as for any multi-level project. Each company has its own requirements. Their websites will tell you how. Nobody has time to give you the details at a comics convention. It's a trade show dealing with every level of arts, media and entertainment, and time is precious.

Of course, if all you have is a script you're probably going to end up sliding off the slush pile. A script is just a script. You need art, because the publisher isn't a mind-reader, either.

Don't try to talk some artist into working for cheap or free. Learning to be a really able artist requires thousands of hours of work and thousands of dollars in expenses. Unless you're part of a team that deeply believes in the project, that way lies fights, accusations, and a reputation as an amateur and an asshole. The artist is not lazy or feckless; you're just on the back burner because you're not paying, and somebody else is. It doesn't matter if they showed up after your project started. Artists are professionals, and while it's fun to work for the love of it - it's where the word "amateur" comes from - this is the real world, and they have a job to do.

If you've got a fat wallet, you can pay your artist without quibbling, but you still have to know if you like his or her art already. Don't demand the artist imitate a much more expensive artist, unless you're willing to pay the same fees; that's just getting copy-art for cheap. It's not going to help your reputation.

You pay up front; you're hiring the artist to do the work, not to decide if you like it or not. The usual arrangement is fifty percent up front, fifty percent upon approval.

But what if you're strapped? There's a way to get a good start. Put money together to pay well for the first pages before submitting the project to a publisher. You're acting as a small-scale producer; you have to find the funding for the film.

I can remember one young man who approached me and offered $750 for twenty pages of art. Starting at black and white for $150.00 per page and going up - he wasn't getting beyond a short story. I asked him who his dream artist would be, and if s/he was at the show. The man was. Then I asked the writer who he'd approach second, and then third. They were all at the show. I told the writer to wait until his first choice was on a break from lines of signings, then approach him politely, and offer the entire budget for one really fine color splash page.

The writer returned within the hour. His first choice worked at a higher usual page rate, so turned him down, but thanked him for the offer. The second had too much work on his plate. He got the third.

Start at the top. Offering a copy of a really top-class piece of art along with a script is going to at least let the publisher know you're serious about your project.

How many of you out there are asking what a splash page is? If you don't know, or what a Kirby grid or a signature is, or how many of them go into a comics format, then you need to google some comic book terminology. Or at least get to the largest comic book show you can find, and geek up. If nothing else, you could see Darth Maul on stilts playing a bag-pipe.*

*And yeah, it's onYouTube.

I'm going to be adding to this report as the weekend goes on. Mostly it's just copying from caffeinating on Facebook. There WILL be more! 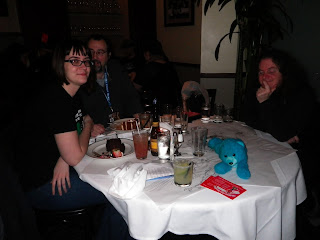 First, the Drink N Draw. Yes, I'll try to find everybody's names. I'd just driven in from Clallam Bay and finished the first set-up in the Prism Booth, and then spent all afternoon promoting the Clallam Bay Comicon. Bluebear evidently feels right at home lying on everybody's art.

At the GayGeek party at the Raygun Club, Friday night, I vowed to have ONE drink. Hard cider. But when the barkeep hears you're the author of "The Desert Peach" and whoops, "YEAH, I'm buying!" you have another. Did I mention the mead tasting?

On the one hand, Miss Cheap Date has to work through a bit of a hangover this morning. On the other hand, one does not hesitate with bus connections. I was the Queen of the Seattle Bus-hops last night... What? I wouldn't have gone partying, if I had to be at the Prism Booth any earlier than 2:30 (#1214). It let me meet or re-attach with a great bunch of people. Now who's up for R-Place tonight? :D

Saturday! Of COURSE I'm wearing my Ka-Blam tshirt in the Prism booth. Maybe BlueBear needs his own little Ka-Blam get-up?

Dude came up to me, in a costume about an alternate world, said it was a "matriarchy, where the men are all chattels." Really? REALLY? Do you want to know why we roll our eyes at you? No, we would not capture you and fulfill your servant fantasies - you are all too high maintenance! We would tell you to get the hell out of the way. As in: "Hey! Put your damn warpaint and spears on, then meet that other tribe's warriors on that hill over there. We're trying to make clothes and feed the kids, here." Well, d'uh.

Some more wonderful folks came up to say hi, and pose with His Bearness.

Yes, I sold mass books, and made new friends and fans, and hung out with NASA. They now have the "Science Hag" bumper sticker you can get at the Zazzle link at the bottom of this page. It was done in their honor, and now NASA has confusing bumper-stickers, too.

They had a big booth in the lobby, along with the Lego® exhibit, and they were punching holes in chocolate and launching foot-rockets and generally having too much fun with science. Then they went strutting down to see Patrick Stewart, bringing their own astronaut, and their whole attitude was, "WE got a REAL one!" It was pretty funny.

After the convention, Roberta Gregory and I went off to the Grill on Broadway in Seattle's Capitol Hill district, to do Karaoke with Jonathan Jones, professional Karaoke dude. She took on "Aqualung." I did all right with "Radar Love." But - I was pushing it when I thought I could try "Blue Savannah" and "Psycho Killer." Well-drinks or not.

Anyway, back home, getting ready for the Clallam Bay Comicon. Um.... I might have oversold this thing.... If we don't watch it, we may have Darth Vader playing the bagpipe on stilts invading a small rural town.