"Bread and Swans" - prose Desert Peach novel - now at http://ping.fm/FsbdS
Posted by Donna Barr at 9:15 AM No comments: 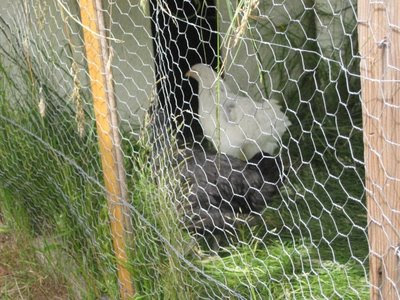 As requested, chicken pictures, of our possible Aracana crosses. The white one is "1" with the larger dark one is "2," the smaller dark one "3" (Naming goldfish or farm animals can be fatal).

Yeah, I know, the yard needs moving. The grass piled on top of the cage is "yard waste." Why the hell buy hay when we all have it growing at the edges of the lawn? As demonstrated to farming friends lately, if the farm's being run right, there should be no "waste" of any kind.

Trying to figure out how to clean cage and get eggs out. The cage was built last year for ultimate security against small and flying predators, and to keep the coop dry, and now it's hard to figure out how to let a human in. They're only 1/2 grown, still cheeping, so there's time.

2 may be a rooster, but Joe said bring it back it if is. Living in one of those neighborhoods where animal noises MAY bother neighbors.

Wish I had a film of Hector seeing the chickens the first time. He sat with his eyeballs hanging out on stalks, until they came up to the wire and stared back. Then he seemed to become completely bored and disgusted. As he turned and stalked off, the birds' necks stretched out watching him leave, as though saying, "Come back!" They grew up in a box and everything seems fun to them.

Their cheeping sounds just like eagles talking. Their beaks are oddly eagle-colored. Since DNA has shown falcons and chickadees are closer to parrots than other birds of prey, now I'm wondering about eagles and chickens....
Posted by Donna Barr at 10:00 AM No comments:

I has chickens: http://ping.fm/xUkeg
Posted by Donna Barr at 8:52 AM No comments:

We call them, 1, 2, 3. Because I can't tell two of them apart and I refuse to name food animals, even if they are only for eggs.

I bought them from the old bachelor farmer up here. He showed me his Dexter cattle, his half-breed Jerseys, his half-breed Boer goats -- including his 300-pound buck -- his many chickens, ducks, and one big handsome turkey. And about a bajillion Min-pins. And two donkeys. He says he wishes he had a cat, "But they run off or my dogs kill 'em."

I told him to get a BIG cat. Preferably a mean old farm cat. "That's what's spanking dogs is for," I added.

The farm is what you'd expect of a place run by one old wirey guy; dozens of half-finished projects, but all in pretty neat piles. No odors of rot, just clean manure, dirt, grass and wood. Beat-up old trailer, but all the animals healthy, sweet, unafraid - and spoiled rotten.

As I helped him unload the 50-lb bags of feed, he remarked, "See where all my money goes?" But first he had to yell at all the goats and tell them to get off the truck.

I wonder if any of the animals out here get eaten. He seems to live on the milk. He says he used to "Sell milk as fast as I could pull it," but the county got in the way ($#!!! industrial farmers!).

These girls prove that laughing at something is the best way to destroy it: http://ping.fm/tptwT
Posted by Donna Barr at 8:27 AM No comments:

Desert Peach musical clips at: http://ping.fm/e2Ucj
Posted by Donna Barr at 10:26 AM No comments: