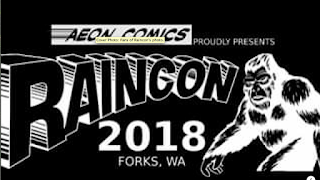 The Clallam Bay is now part of history - but it became the mother convention for:

(It's been held since - it was fabulous! And plans are for an even better one next year).

The website is RainCon.com and you can join in at the Facebook page, Fans of RainCon. If you don't use Facebook, contact me at donnabarr01 at gmail dot com, and I'll hook you up with Evan Sveum, in Forks, who runs RainCon.

Unlike the Clallam Bay Comicon - which I never tried to promote as anything but an attempt to get what I love about comics onto the Olympic Peninsula - RainCon is a fully-expandable professional comics/entertainment convention. I've always promoted comicons as job fairs, and the locals are getting it. And yes, we can thank Twilight for turning around their ideas of what entertainment and city folk are all about. They want MORE.

The Clallam Bay Comicon will not continue. Those who usually come to Clallam Bay should know you are very welcome by this community, in all ways, and if you want to show up on the weekend after the 4th of July, to enjoy Fun Days, followed by an evening party and fireworks, please do come on up. I'll be at the beach and the newly-renovated Clallam Bay Inn. We could do a drink-and-draw!
Posted by Donna Barr at 2:42 PM 1 comment:

First of all thanks to the ShortRun staff. Their on-floor map included a tribute photo to dear Mark Campos, whom we lost under such tragic circumstances this year.
They know what they're doing, and this just gets better and better every year.

Secondly, thanks to The Stranger for advising the attendees to bring CASH and loads of it. The books and other goodies FLEW off the tables.

Valierie Niemeyer made a great show pal. She and her mom were so much fun and so full of energy. Her mom came with snacks! And Valerie's work is lovely. Especially her skeleton unicorn, just right with Halloween and Day of the Dead just behind us.

What can I say? ShortRun is one of the best comics conventions anywhere. It's small - crammed into the Seattle Center Flag Pavilion - and more and more of us are buying a quarter table, just to get some space.
﻿

The Fantagraphics Store party was great, as always, thanks to Larry. Even better. Carol Tyler was there to celebrate her new book about growing up with the Beatles - and led a singalong that reminded us just we all knew just where to say "OOOOH" and go up the scales.

Missed the Vera party - but am going to schedule my trip better next year, so I'm up for it, instead of falling apart.

This show is too good.

I can't guarantee I'll get a table space next year, but signs are good.
Posted by Donna Barr at 2:19 PM No comments:

What a great show! Held in a convention hall in a beautiful park in Sequim, Washington.
Even though I've been going to entertainment conventions for decades, I never really looked in on the gaming track. Gamers were always quietly concentrating in their own room, I was working my table in the Artists Alley, and Never The Twain.
I had no idea what fun, happy people gamers were (and smaller bad swab groups like those that caused Gamergate didn't make me eager to know them. Another black mark against those schmucks).
What an eye-opening. The gamers were totally welcoming to Roberta Gregory and me, the only comics people at the show. Two of them eagerly listened to how to turn their game into a comic book while avoiding pitfalls and keeping the costs down. Of course I recommended Ka-Blam.com for printing!


I even played a game called Conspire - originally attracted to it because all the players were wearing homemade tinfoil hats. Did we ever have fun! We were the noisiest game in the room because it's a very simple roll-playing game. We started with "Who broke the coffee shop blender?" and ended up involving a stolen meth shipment and the FBI. We were laughing so hard!

(For those of you begging me for years to make a Desert Peach game - just plug the characters into Conspire. You will not be disappointed. I would love to hear from you, and see photos and videos of you playing the Desert Peach Conspire. I wonder if anyone would like me to run one at any of the shows?)
I learned that only the figure-makers in gaming seemed to be able to do horses well. NEXT year - if we're very lucky and all parties are pro-active - there MAY be an actual horse at a horse-drawing class. There are hints the horse will arrive carrying a cosplayer. We shall see!
Congratulations to Port Angeles's own AnimeKat and Jeff Tingelstad for organizing and filling up a bang-up first year gaming convention.
As a comics person, I advise us all to get in on the action. Roberta made most of the sales, but I was there to connect our two nerd worlds. And I think I was quite successful.
So be on the lookout for next year, and all our nerdcons on the Olympic Peninsula, including the Forks Raincon and my own Clallam Bay Comicon.
Roberta and I stayed at a very cool AirBnB just west of Sequim. It's a horse-and-dog rescue farm! And all the animals are spoiled and happy. As usual, the rest of this report is a photo essay. Just to give you a taste!

Posted by Donna Barr at 1:35 PM No comments:


Guest Creative Carla Speed McNeil got jump-started for her art and career - the girl just had cabin fever and needed a vacation! Everybody really enjoyed her talk about how to get started in comics and stay in comics. It was a riveting talk. Girl has been BUSY!

Jake Richmond, the creator of the webcomic Modest Medusa, showed how easy and fun it is to start making webcomics, as well as facing the challenges of finding time to create, build an audience, and make a living.

Saturday concluded with the costume and cosplay contest. The only particants were the Curtis family, but they put on a lively show. Carla judged them and they got lots of prizes, donated by the Clallam Bay Visitor's Center, the Sunsets West Co-op, and all the tabling creatives.
Of course, the evening ended with dinner at the Clallam Bay Inn, whose waiters were kinda shocked how well we tip. We have friends. After that, it was fireworks in Sekiu, watched from the Clallam Bay Beach.

On Sunday, Larry Lewis reprised and expanded on his original demonstrations of making and selling minicomics. Minis and zines are the ground zero for getting started in the comics world, and everybody from Robert Crumb to Neil Gailman has done some form of small, inexpensive self-published booklet or pamphlet. Larry's form is almost like origami, covered with tiny, intricate images and lettering.

Clallam Bay's Dennis Hondorp, who recently retired as the production coordinator/buyer for independent set building, shared his life in the film industry. His talk began as an historical overview, and he seemed a  to feel a bit left out - until he began to tell backstage stories about well-known actors and got a shock - not only did the audience KNOW about the "Seven Degrees to Kevin Bacon Game," but considered him a coupe in making points in the game.

With the input of the audience and other creatives, he ended up sparkling and excited as anybody newly in the industry. He volunteers at the Clallam Bay Visitor's center - and says to come down and ask him anything about working in film!

Kalen Knowles offered a crazy new game at his table - a form of exquisite corpse, the body parts chosen by rolling dice. It looks like crazy fun.

The next day, I took Carla and Roberta Gregory all over Neah Bay. Photos below!

The Stranger ad, funded by a grant from the Olympic Peninsula Visitor's Bureau, brought in three times as many guests. So - money well spent, guys!

With the success of RainCon (Forks) and Optaccon (Sequim), I was GOING to stop running the comicons, but with the Curtis family volunteering to take over costume contests, and everybody all excited about NEXT YEAR - well, I guess you all better start watching for 2019. I'll rev up right after New Year's - but get your rooms fast if you intend to come. We're STILL TINY.


Enjoy the rest of the photos! I usually just continue the blog in the captions.

Posted by Donna Barr at 4:22 PM No comments: 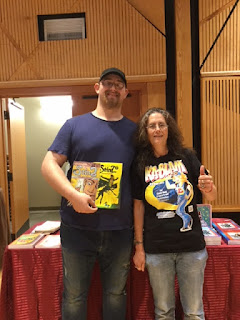 What a great first convention! Forks, Washington, is definitely on the comicon circuit now. Evan Sveum of Home Slice Pizza and Comics - how fitting - did a wonderful job on his new RainCon.

As usual, I have my posting of me wearing my Ka-Blam Tshirt, with my very first RainCon customer. If you need quality Print-On-Demand that will let retailers buy at nearly-'80's prices, it's the place to go. And readers can do the same at their store front at Indyplanet.

And here are many more Raincon photos!

I wanted to listen to the lecture, but there were so many interested people I had to pay attention to, at my table. Friday was definitely rocking.

The Italian sodas were on sale at the table to raise funds for the LaPush Hallowe'en haunted house. The milk in the sodas came in handy for a calcium boost, and they added sugar-free options.

I've heard the haunted house is in its third year, and will scare the teeth out of your head. The monsters practice all year - and are very professional. No, I don't want to go. No, I will not miss it. I hate and love haunted houses dearly.

All sorts of gaming going on - and the full-on tournaments started after the nightly movies, and ran until 1:00 am, Friday and Saturday.

I don't game myself, but I used to do gaming illustrations, especially for Steve Jackson, and have some fun stories, including my "Pirates of the Caribbean stole my dialog!" story, involving Steve's Lego Pirates games at a long-ago Miscon. Oddly enough, Alice Ryan, who ran the great Steampunk table, says that was her very first con! Serendipity.

Of course we had cosplay. Did I get good photos of the contest? No, I was helping judge it. Look around Facebook for Raincon photos. Quite the good turnout for a very first convention.


Friday evening, the movie was Rocketeer, which I missed to head back to Clallam Bay to get some sleep. Since my sleep was choppy, and I had to end up napping in a back storage room on Saturday anyway, I might as well have stayed.

Saturday, the movie was Guardians of the Galaxy. I'd never seen it big screen, and caught the moment when Chris Pratt's ship flew up on a column of water - and ran into the camera lens. Too funny.

Ended up eating too much pizza, including Home Slice Pizza - especially their darn wonderful chicken-and-artichoke - and Mexican ice cream from the shop down the block.

Helped a scared local kid to come out as a nerd and a furry: "Wear what you want; nobody's going to point or make fun of you." Alice Ryan's steampunk table provided his first pair of ears and tail. By the end of the show, he was running around with his little fake fox tail, perfectly at home. It was great. Welcome to our family.

And everybody else, too - because tables are selling for 2019, already. If you're on the way to the beach, drop in for an hour or so. We'd all love to see you.

Posted by Donna Barr at 1:36 PM No comments: