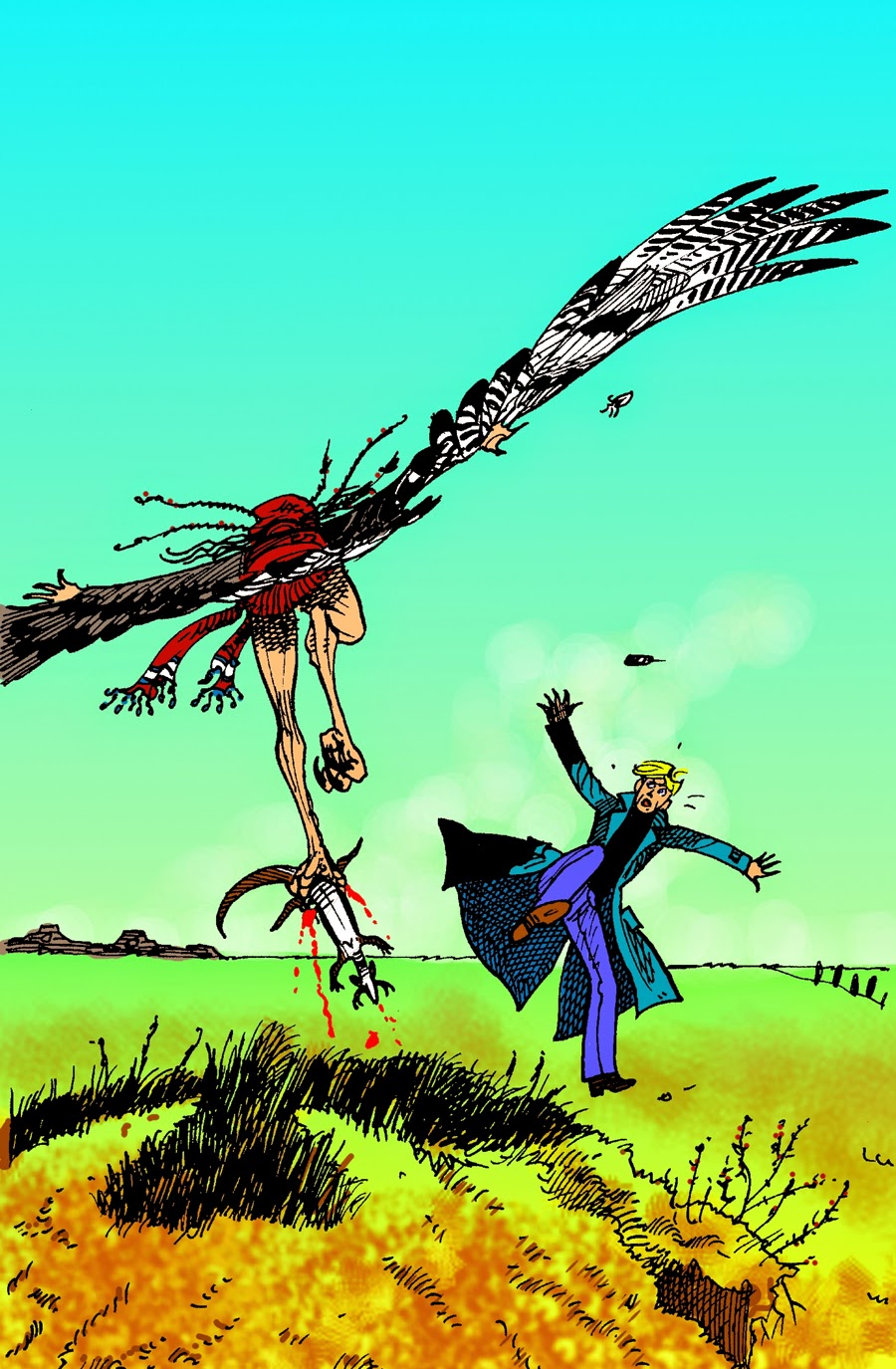 Coloring all the black-and-white Afterdead stories for use as webcomics.

The color files can then be used on Amazon's Createspace for full-color books at a decent price.

Here's the second page of "Keeper," and the Desert Peach discovering that, wherever he may be now, there be harpies.

Posted by Donna Barr at 4:36 PM No comments:

My Part In The New Volunteer Army

Okay, I gotta admit this.

Not a big surprise. A very minor moment in military cartooning, my contribution to the Army's trying to redesign itself after it finally got it through its thick head that the draft wasn't to everybody's taste.

It's the new face of the Volunteer Army - the people who were tired of the draftees calling them "Lifers." (Okay, the Lifers got back at them by stealing their story and building a military that's just a WPA works program, but we get nothing back for our money. And a lot of the involuntary soldiers wanted nothing more to do with the military, so the Lifer fanboys got to keep the story, drag us all into their fandom - kind of like they did to make Vietnam, because WWII as over, and they wanted another big convention, like really bad Batman fans or something.)

And yet there is irony. You think I did this voluntarily? As the Madigan Hospital Commanding General's Little Pet Teletype Operator, I got told I was going to enter, and that was an order.

The hospital had discovered I could draw, so if any of you from 1971-73 at Fort Lewis remember the posters, cards, signs and general cartoon slathering around the post and the hospital at the time, blame me. I was as volunteered, paid-extra, trained-up as a WAC drill instructor - in other words, not at all.

However, when my cartoon was chosen for the face of the new campaign, I did get a $50 US savings bond. And to shake the hand of the Fort Lewis commanding general, who was all happy, because he liked girls so much he would even come to the WAC company teas.

Which savings bond came in handy when Sergeant Major Stines came around growling during one of the bond campaigns to know if I had a Savings Bond, and I could answer that I did.

Thank you very much, Sergeant Jerry Gift, for blowing my cover and laughing, "Sar'n Major, she WON that!"

I'm lucky I still HAVE an ass. Command Sergeant Majors have SHARP teeth.

Note: I wasn't finding anything about Sam on the internet, even though Dan says he saw him in The Stars And Stripes newspaper, while he was in Vietnam, before we met, but then I found this tiny envelope on the floor of the studio, addressed long ago to my parents - and there in the envelope was the cartoon on this page.

I'd been sending my correspondence to San Diego State Special Collections, and this one must have slipped out. Just when I need it.

Sometimes the Gremlins are nice.
Posted by Donna Barr at 3:25 PM No comments: