Made it again to the Olympic Collectible Expo!

It's tough for me, because I have to drive four hours down and four hours back, but we little comicons out here on the peninsulas need to support each other.

Not only is it the same wonderful crew at the very nice Silverdale hotel, but I picked up two people interested in tables for the Clallam Bay Comicon. If they do get them, we'll be sold out for 2018 (although I don't mind them subletting tables to other creatives - so long as they let me know they're doing it, so I can put it on the blog page in time).

The photo is me in my Ka-Blam Printing t-shirt. Best little company to produce small-page-count comics at nearly 1980's prices! Since I'm working with Emerald Comics Distribution, they'll be just the thing to send out limited monthly releases of both old and new books.

Digital and Dice's Lady Crass was pod-casting all over the show, and this is the one with me in it (Click link). She must have had a magic camera! Blacky and I perform pig stick theater.

The show is too close to get a room, but too far to drive, and make the whole show, before and after daylight. But if I show up a bit late in the morning, I'll be able to stand a dark drive home - especially since I now have anti-glare glasses that will defeat even those pesky halogens on rural roads. I'm also researching airbnbs in Bremerton - which would allow for some very handy erranding (Peninsula folk have to stock up on cheap bulk items like a loading submarine when in town near a CashNCarry).

I'm going to ask OCE if I can just send some backstock and goodies forward for people to see, and even take, and then bring back for me to autograph when I can get there.

One way or the other, I want to make the shows out here happen. And keep an eye out for the Forks Comicon, coming soon! It's called RainCon - and it's happening, June 2018.
Posted by Donna Barr at 6:41 PM No comments: 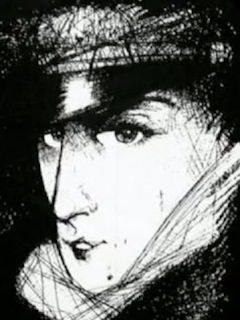 Who wants to see a concert based on a book about a nice gay man who ends up in the German army because he doesn't want to do politics?

Yes, we're doing it again - going for a Kickstarter to turn the 1992 Desert Peach musical into a concert.

If you want to earn a rank in our army, our just be a private soldier, go to the link.

If you want to see the Alternate Timeline video, go to this link.

It won't be full costume, but it will be ten singers, at least, doing all the great parts from the wonderful songs by Michael Seyfrit. We may even have some of the original cast on board!

Share this as much as you can, and help us make it happen again. It was so much fun for everybody last time - and it's time for it again.

Posted by Donna Barr at 6:28 PM No comments: