Paper Dolls In My Books

Thank you, the paper-doll-collecting reader who asked for them. If you go to Indyplanet, these are the issues with paper dolls in them:

Desert Peach #8 Rosen (Reprint inside back).

Desert Peach #17 Peach and Udo FULL COLOR (Reprint inside front and inside back) AND Barb Rausch's Udo-and-Falila paper dolls on every single story page, including the two of them in their adorable all-to-gethers.

There's a paper coll of Udo somewhere, but I dunno if it's in one of the reprints. I searched through all the reprints, but I may not have put it into any of the books.
Posted by Donna Barr at 9:17 AM No comments:

WHO is that man, anyway?

EVERYBODY keeps saying Dr. Who ripped off Rosen in The Desert Peach, with a character named "Jack Harkness." 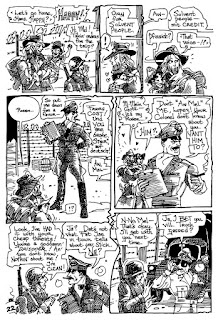 While I know my biggest fan base is my peers, the Pilot Who Shags Everybody And Everything has been around since - well, cavalry officers. BlackAdder has their own version in the World War One episodes. Red Dwarf has the alternate Rimmer. The Brits in particular do it well. Woof.

Even "The Mummy" had a mummy guard who did a neat flip with his spear before he put it to use, as Viktor MacLaughlin did with his rifle in "Gunga Din." Not only a professional soldier, but probably the hot guy in the squad.

Now, in my case, Rosen is based on a boyfriend I had in the army, who actually DID introduce himself with outspread arm wings as "Hi! It's me - Old Crash-and-Burn!" Who looked pretty much like Rosen (I go for guys who look like Dad, with the black hair and blue eyes. Oh, what? We like our own genes).

I've never watched more than a couple of episodes of the old Pertwee Dr. Who, and it didn't quite push my buttons. But one of my readers sent me a link to a funny Jack Harkness montage on YouTube.

It's pretty funny. You will giggle.

I dunno if I'll ever be a Dr. Who fan, but this makes me think it would be fun to see if the library has later versions of the series. The other actors are pretty funny, and the robot ladies are cool, in a retro Richard Lester way.
Posted by Donna Barr at 9:27 AM 3 comments: