Everything But The Job

Sigh.
We've got a postal situation up here -- our post office has gone postal.
It's sticking mail in the wrong post office boxes.  Since that's all we can get up here -- and I don't know why, unless the postmaster is just lazy -- that means envelopes with bills, checks and even medication are disappearing.
Stupidity?  Vindictiveness?  Theft of checks and drugs? That's always a possibility.
One of the people who used to work at our post office during the last time this happened, said, "The postmaster is doing everything but her job."
Which I can believe.  Half the time it seems she's running some charity or on the phone with her relatives.  We need volunteers up here, and kids have to be dealt with, but first of all she's the postmaster, and she needs to focus  on that job during working hours.  We can all screw up on the job, but repeated mis-delivery of important mail in a small town where many people can't get it any other way is inexcusable, and damaging.  People tell me the way they cure the problem is to move their post office box to Sekiu -- but what about those with no cars?  We do have them up here, among them the sick and elderly who live downtown.  When they need their mail, do they walk two miles along a twisting highway with intermittent shoulders, between cliffs and salt water, or do they wait until they can beg a ride?  Do they take the early bus -- for three dollars they might not have -- and wait over an hour for it to come back?  Or lend out their box key to somebody else?  Is the postmaster aware of any of this? I doubt very much she's trying to get somebody killed on purpose.  I'd never accuse anyone of that, but short-sightedness and sloppiness in a very important job like this can be lethal.
Anyway, for anybody up here, don't let our postmaster force you to move your mail.  Call the United States Postal Service and start a case file:
Call 1-800-ASK-USPS®  (1-800-275-8777)
M-F - 8:00am-8:30pm ET  Sat - 8:00am-6:00pm ET  Sunday - Closed.  Holidays - Closed except for: Martin Luther King Jr., President's, Columbus, and Veteran's Days, 9:00am - 6:00pm ET.
Posted by Donna Barr at 9:01 AM No comments: 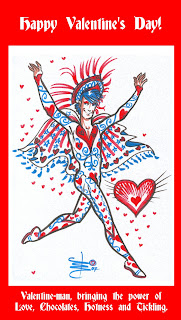 The Grandmother's Hive -- The June Review.

The Grandmothers' Hive got this really nice review.  I'm really going to have to post some of the art.

Posted by Donna Barr at 2:39 PM No comments:

The Price is Right

Just got back from a 241-mile round trip with Price to the vet specialist in Kitsap County.  What a good kitty!  Only an occasional "Are we there yet?"
Lung x-rays clean, all bloodwork clean, no infections.
He has a 3-centimeter-long thickening of the walls of his small intestines.  The radiologist will have a report back in a couple of days.
Light some incense for it NOT being cancer.
Posted by Donna Barr at 4:16 PM 6 comments:

Can we get the Price right? 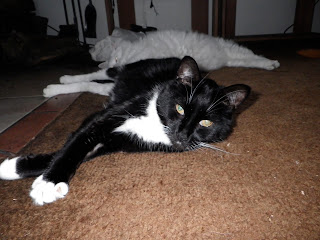 Our cat Price, whom we've since about '98, is suddenly losing a lot of weight and not wanting to eat.  Been through blood and senior tests, nothing wrong but a low thyroid reading -- and he's getting thin, not overweight.  We've put him on thyroid medication, but it doesn't seem to be doing anything.  So we'll be setting up to go to a specialist.  He had a cancerous growth removed from his face a couple years back, and that will be part of the consideration.
Don't laugh - I've known people to spend $4500.00 on a dog for cancer treatment.  Ask what happened after Hurricane Katrina when people were told pets couldn't be rescued.  Family is family.  A good way to get hurt is to go for somebody's animals.

Price is from Bremerton, by the way. First time I saw him was butt-first in a homeless woman's arms.  She told me, "You have to take this cat!"  Her kid was looking up at me, hoping I would.  I finally did take the cat and put him on the bed, and when they'd left, I went back into the bedroom to find him crossed-pawed and looking around, like, "Yeah, I could live here."


Turned out he'd been dumped at the local St. Vinnie's and had been living in the parking lot for a couple weeks.  The woman couldn't stand it any more.  As usual, it's the poor who try to pick up the slack.


Price was named after our other tuxedo cat Vincent, who disappeared in 2001.  He's too young to be going into what looks like old age failure -- but that two weeks on the street might have set him up for a shorter life.


Here's hoping we can do something, but when they stop eating I've never seen it turn around.
Posted by Donna Barr at 1:30 PM 7 comments:

Getting the Fix In

Problem with reporting a story to a local paper led to my finally being able to suggest something I've wanted to ask for, for a LONG time.   Here's a suggestion:  a press officer.  Especially for official departments during an emergency.
Clallam Bay has a very small and dedicated fire department, who do excellent work in all areas of firefighting and emergency care, and in getting their message out.  The chief should be especially commended for taking time to organize PR in non-emergency situations.
The Sheriff's department always has a press contact.  Of course, it has a much larger manpower base, and a larger budget.  But it knows the importance of getting an accurate message out to its community.
I know it will pose a hardship for such a small fire department, but even a quick cell-phone call to me (I'm the local, after all, and can get there sooner), and details when available within the evening if possible, would be a huge help in centralizing information, especially when it will cause suffering if mis-reported because there are no official sources (ie only neighbors).  The fire chief isn't always available; fires can take off again, and the moment for an interview can be missed, at least that night.
When I called the editor of the Forks Forum to advise him of mistakes, he gladly gave me the information he was able to get with his longer deadline.  He also paid attention when I told him the information was iffy -- that most of the people I was able to talk to said, "I don't know.," or were distracted by the fire.  He has helped me out on pooling resources for local papers before, so I was able to get some official information back to the other paper, if only tardily.  Cooperation between local papers is very laudable in community information support.
Normally, a reporter could be sent right out to a street address, but up here, a wrong position can lead to hours of lost time, by which time the emergency is over.  Often, out-of-area papers think everything up here takes place in one community, IE Sekiu.  We take time to check out actual addresses, and I still end up running up and down switchbacks because the editor didn't make the contact to get a gate unlocked.  If I were a full-time paid employee of the papers, with benefits, this wouldn't be so much of a problem for me, but it still leads to missed opportunities.
I do have to say that I'm not going to wait around for up to four hours in the rain for the sheriff or any other officials any more, because I get paid minimal freelance rates.  I've had two cameras ruined by weather (have a nice waterproof one now).  It may lose the local communities coverage, but I have to prioritize work based on payment, and my fans and readers just pay better than these small side newspaper jobs. I'm not trained or really paid as a reporter, but am a fiction writer and artist.  Journalism is a full-time specialty.  Out-of-area papers are just going to have to pay the gas mileage to get their people up here.
The Forum, which is in the west end, does take this into consideration when asking me to do a story, thinking about mileage and time, and pinpointing places. The former editor, Denise Dunne Devaney instituted a page for the West End in the Forum, and I've tried to keep it live.  A lot of the local community work with me to keep that page in place.  Thanks especially to the Three Sisters of Clallam Art Gallery and the co-op and community gardens in getting their news out.   And holding still long enough to get names spelled right!  I'm sorry your photos have been cut up by the layout people, but space is at a premium for ads in a print newspaper, and it's an editorial and layout decision to chop your heads off.  I try to send them photos they can't chop, but once the paper's got it, that's their business.
Prediction re costs of printing newspapers:  paper may stay around for newspapers, at least for the life of the aging population, but as weeklies, putting up daily news on the internet where it can be quickly corrected.  The Forum already has that system in place.
The only thing that might save paper printing is making paper out of fiber sources other than wood.  It makes terrible paper, very high in acid, and takes a huge amount of resources to produce.  It's an antique technology, though, and usually once such a technology is thoroughly integrated into an empire's system, it can't be shifted and adds to the burden of the failing economies and systems that appear at the end of an empire.
Posted by Donna Barr at 11:14 AM No comments: