Who knew?  Facebook got us back together after more than 30 years.
Drove 8 hours round trip yesterday to meet with a German Professor I hadn't seen since 1978.


She has hardly changed, and she has netted herself a handsome, funny Egyptian husband, named Mohsin. See if I'm wrong.  That fedora is from Chicago, where else?
We had a hugely fun time in the town of Bainbridge, on Bainbridge Island, in the Puget Sound.


Okay, so following our noses to a wonderful local café, blathering our heads off about ghosts and shouldn't teachers receive an Oscar as performance artists, just for starters, and walking along the waterfront trail, finding the magical Madrona grove,  and finally going back and having even MORE strong coffee may not sound like an exciting day of surfing or landing badly in wingsuits, but we enjoyed it. 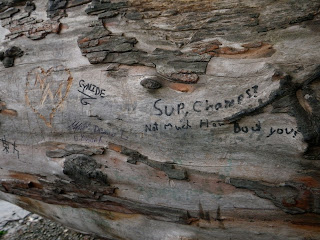 Thankfully, people aren't carving initials on trees so much any more, but simply writing notes. Ours are very tiny, so you probably can't see them, but we know where they are.

Dagmar can still drop one eyelid without moving another muscle in her face.  It's still just as funny.


In the Bainbridge shoreline walking park we found a hut made of broken branches and big-leaf maple leaves.  After a day's rain, the inside of this little shelter was completely dry.

Thank you, Facebook. Even if we never meet up again, I'll remember this day forever.

Writer's Block With A Crossbow

There's the friend whose brother cleaned out the burial fund, and used their father's body to run the HOV lane to a cheap cremation.
And my college professor who worked with a woman who came over with her husband with the von Braun gang, and years later settled in Illinois.  There, the couple had problems with a deer eating the roses.  They applied for a permit to shoot the deer.  The state gave them one.  They were allowed to shoot the deer.
As long as they did it with a crossbow.
And people are still complaining about Writer's Block because they can't think of any ideas.....
(Somebody in the State of Illinois was/is pretty cool.)
Posted by Donna Barr at 10:20 AM No comments: