RAINCON AND THE CLALLAM BAY COMICON MAY BE RETURNING! If it does, it's coming back July 7-9, 2023, during Sekiu Fun Days
Links to other Peninsular (Olympic and Kitsap) Comics, gaming, cosplay, maker conventions:
Raincon
SquatchconPA
Olympic Collectible Expo
The Lion's Club wants us BACK. (If you're interested in RainCon's history, click  THIS LINK )
DEALER TABLES:   $25 whole 6-foot table: Contact me at donnabarr01 at gmail dot com
Dealer contracts: THIS PAGE. Payment cancellation deadline is May 1. You are expected to know and be responsible for your professional and licensing obligations for use of copyright, food sales, taxes, etc. Participants will help clean and straighten hall after show closes Sunday; keep the Lion's club happy!
Volunteers: There are none, because CBCC is not a non-profit organization. You will get a table and two chairs.   Bring any equipment you need, including electrical wires and table covers.

Gaming and Cosplay: Quiet versions allowed in the hall. A large round table will be provided at the front of the hall for gaming. If you want to run a cosplay contest, provide your own recognition and list the time below.

PANELS, DEMOS AND EVENTS: Make one up, choose a time on the schedule at the bottom of this page, email details to: donnabarr01 at gmail dot com

AWARDS: Your fans are your reward.

NECESSITIES: bring food, especially if you are on a restricted diet, and medications. There is no drug store or full-sized food store. The last place for these on the way are in Port Angeles. The Hessmart has snacks, basics, deli, coffee, and booze.

AREA LODGING RESOURCES LINK for the Olympic Peninsula.
For Clallam Bay, a good idea would be to rent an RV and share with other vendors.
Forks RainCon offers camping at
Forks 101 RV Park.
Link: Food Around Town

HOW TO GET HERE: Driving from Seattle: Ferries, then highway 101 around Lake Crescent until Neah Bay/Clallam Bay turnoff at highway 113. Do not take 112 from Port Angeles, because Burnt Mountain is collapsing the road.
Olympic Bus Lines from Seattle to Port Angeles.
Clallam bus "Strait Shot" (cheaper, faster!) Bus Schedules. Once in Port Angeles, catch Forks 14, then Neah Bay/Clallam Bay 16. Tell your drivers, ask for advice.

WI-FI is 24/7 at the library, right around the corner, also at the Visitors' Center.

FACILITY CARE: No tape of any sort on the wall. Respect the Lion's Club's wall displays. All with tables chip in to clean up at the end of the show. It don't take long; they love us for it.

First of all, Dara Korrati beat me to a con report, and my only excuse is I escorted our special guest creator, Leanne Franson, and her son Tautau back to Port Angeles before returning on the bus. Here's her report, and it's a fun one, with great photos of the con and the area - and links to her concert and recordings at the show!

As usual, this is mostly a photo blog, so enjoy! Some of these photos are mine, some Leanne's.


First of all, even though the campaign ended with the convention, we'd like to thank everybody who got involved with the GoFundMe campaign to help defray Leanne's expenses. You came through like champs! Here's Leanne getting her checks in front of the garden in my back yard.

The con itself started with the Fun Days parade. We're changing the con starting time to noon, because everybody goes to the parade first. Didn't matter if it was raining, we had a great time anyway. We're not made of sugar, we won't melt (thanks, Mom). 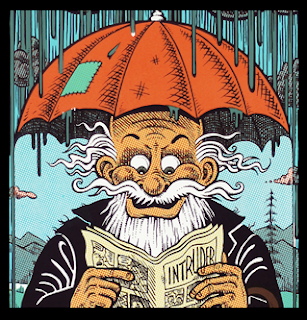 Leanne Franson, our Canadian guest, was interviewed and filmed by Jason Roberts, who came down from Neah Bay specifically to promote this comicon. He really added to the show.

Rod Espinosa, who couldn't attend, instead sent us a box containing his "Adventure Castle" game. I've never really gamed, although I've worked as a gaming illustrator.

AC turned into a crowd-pleaser, drawing in adults as well as children. We played it whenever things got slow - which wasn't very often. Tautau Franson, our guest artist's son, was a very helpful game master. We've decided that "Adventure Castle" is the official convention game, and will feature at our show from now on.

Last year, one of our librarians painted a Be-A-Superhero standup for their comicon. Her name is Pam Force, which we thought appropriate. We all had fun posing with it.

Every year, somebody's table goes hot, and they make all the money and get all the attention. This year it was Dara Korrati's table, mostly because she had such a fascinating recording demo. Congratulations, Dara! Now run over and watch her singing her version of YMCA as "USSR," karaoke style, and hear us all joining into the chorus.

We're thinking, perhaps, instead of having individual demos or panels, we have everybody bring something cool they can show the attendees and other artists how to do. The tables are six feet long, so there should be plenty of room for books and CD's and the demo, too. It certainly seems to help with sales.

I brought a box of spam musubi, which I'd learned to make in Hawai'i, and when I'd microwaved my own piece, everybody wanted one. So now I have a potluck food people like!

Of course, after the first day's show, we headed down to the Clallam Bay Inn, where Cara - our favorite cook and barkeep - was waiting with the best fish and chips on the planet, and good booze. She wanted to know why there weren't more of us. We'll have to bring the fans too, next time.

Afterwards it was off to the beach for the Fun Days fireworks in Sekiu. It was cold and cloudy, so the blasts got smoked over too quickly, but the beach fireworks made it all worthwhile.

Most of the convention artists are local, and so could drive back home after the show, but Leanne and TauTau stuck around for the Dead Dog party at the Sunsets West Co-Op.

I'd never eaten there, and was amazed by the fresh, innovative food and low prices. I had a burger "snack" that was really huge, and cheap - and Leanne and Tautau plowed through two helpings of bean stew, fried eggs and tomato salad. Not only is the food good, but you can step over to the store and choose chips, bread and drinks to add to your meal. And if you love the condiments, including locally-made hot sauces, or my sea salt, you can buy them in the store, too.

The whole town sees us as adding to the local economy. We're welcomed and anticipated, now. No, the show will never be big - but it brings joy to the townsfolk, none of whom see anything wrong with nerds any more. So if we haven't done anything else, we've done that.

But - Leanne has hinted she might even be back in coming years. If nothing else, she's discovered how easy it is to get to Seattle, so perhaps she might add to some of our Seattle comics and other book and art events.

David Lasky has hinted he might do a "giant comics jam in Clallam Bay." I'm gonna help if he means it. He comes up to teach at the libraries - so maybe we can get him too!

The Clallam Bay Comicon will always be part of the local history, now, and our artists and attendees have all made that happen.


And now for the final shots - at the closing ceremonies on the beach.

Posted by Donna Barr at 1:01 PM No comments: