There was another shooting of educated people, and this time it's at my university.

I've watched as my colleagues in comics have gone to enjoy this get-together. I haven't gone, because I'm getting less well all the time and my art and books are at San Diego State Special Collections, which is a shorter plane trip, if I ever make it down there again.

But since it is obvious that there is a war on the educated, am I going to have to go to Ohio State and the next symposium? In solidarity?

I would go without a gun, of course. Because I am not a coward, and the reason for having a weapon invented for war - to kill people - is because of fear.

And I call upon my friends and colleagues to STOP trying to "get along" with these Nazis. These people hate the educated, they hate nerds, and they hate artists. They want us DEAD, and they've killed more than a few of us.

Do not tell me this is a "humdrum mass murder." One of the superhero people who was originally a friend of Facebook actually used that phrase, and tried to excuse the Confederacy and its contribution to the hatred of the educated.

I also call upon my comics people - especially you Captain America fans - to understand that we can't just sit around and go after the historical Nazis. We have a more vocal and dangerous population of these monsters in our midst, every day. You need to step it up, look in the mirror of your country, and recognize and fight this culture for what it is - SLAVERY.

I don't need to make any excuses. I draw and write the Desert Peach, and now Afterdead. The latter being what happens when we "normalize" the Nazis. As America seems to be desperate to do, right now.

It is full-on war on the educated. It's Bleeding Kansas. We need to bring the battles of Gettysburg and Vicksburg back to the culture that wants us dead. Not with guns - but not with understanding, either. Because the only way to understand a culture that is still wanting to support its ancestral use of slavery is to call them out on what they are.

If nothing else that, if they need to go steal other people to work to death for them - they must be so lazy it's amazing they still know how to breathe.

In the West, the full-on anger that they can't just go and commit genocide on the Indigenous, that they can destroy native communities for profit, is the other evil half of our history. People are suffering and dying.

Captain America - Your Pants Are On Fire.

Emerald City Comicon is HUGE. And at a show as big as that, we artist alley types just get locked into place and end up being swallowed up in the show.

So - this year, Roberta Gregory and myself are only attending - as regular walking badge-ees - on Friday, March the 4th. We won't be together all the time - we're not joined at the hip! - but watch for her as well as me that day.

We have no specific plans, except to see as many colleagues and friends and just cool stuff - and panels! - on the floor in one day as we can.

So at the end of the day, we'll be tired. I know I'd like a cup of tea and Roberta will probably be up for one, too.

And - there are more small comics events going on outside Emerald City that year. Please let me know - contact links on this page - about any cool stuff any time that weekend. Prism Comics usually has a party, and last year there was a small artist-alley-type show downtown, that was an incredible lot of fun, full of the upcoming artists and their work.

Am I treating Emerald City like I used to treat sci-fi shows? Maybe, yes! But I'm bringing a lot more business cards. 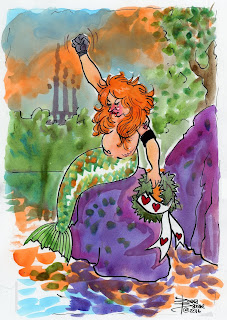 A long-time cartoonist and member of Seattle's Cartoonists Northwest, just passed away.

This is based on his best-known cartoon. In the original, the water and land are full of garbage. It looks better in my cartoon because George helped change that for the better, although we can still see the smoke stacks in the background, smoke beginning to fade.

This is pen-and-ink and watercolor on paper - with just a touch of digital cleanup.
Posted by Donna Barr at 10:14 AM No comments:

Here it is! The new version of my Science Hag bumper sticker, but in full color. With sun and stars!

Hit the link to buy it!
Posted by Donna Barr at 7:27 AM No comments:

That's right. The moment the Social Security came in, we started to fix up a house that badly needed it. We started funding contractors all over the place. Windows and roof, too, because we very badly needed them replaced.

So - if you're a small business and you want to keep that money flowing - and keep health insurance off your back - support Social Security and the ACA.

This is our latest - and pretty much final contractor (cross fingers) project. A new back porch. The old one was rotting away under our feet.

We went with Burdick Construction. Dan Burdick is our guy. And we were happy to pass on the tax money we'd paid over the decades to him. He's the best.

Posted by Donna Barr at 1:04 PM No comments:

Best show yet from the all-woman team! Note the photo - only partial - of the herd of amazing artists, writers, all-creatives, pin-and-tschotzke-makers. The tables - even those crammed together, four artists to the space - practically sparkled with color, innovation and just plain fun.

I barely had time to zip around the floor passing out souvenir/badge-sticker/business cards for the 2017 Clallam Bay Comicon.

I wish I'd had time to attend the drawing and animation events, some of them no more than a table and some floor and window space, but chock-full of action, joy and creativity. You notice I'm not using the word "talent," as though creativity is some easy magic spell. Creatives have to work to get where they're going, even if the power of that work is obsession.

Now for a work photo. Me wearing my Ka-Blam t-shirt. Because when I do that, and post it, I get another $10 printing money! I might use the war chest I've built up with this excellent company to put together a smaller, SECOND Afterdead collection until I get some more pages done.

Now some photos of good friends and long-time colleagues. One of our new young compatriots said she was excited to be sitting next to the old-guard bad-asses. So let me show you some of the baddest!

Here's Roberta Gregory and Dave Lasky, setting up, and revving up for this powerful one-day show.

And here's Dave, as superhero as it gets on a floor full of originals and single creators.

I didn't get a shot of Linda Medley, who spent a lot of time at Roberta's table, next to me. :(

I had copies of the new Afterdead Full-Color collection, volume one. Wesely and Ash, here, bought up pounds of collections including The Desert Peach, Stinz and the Afterdead collection. I'd like to thank Square-Up and their offline mode for making everybody's credit cards work without having to find working bandwidth!

Weseley and Ash weren't the only people wearing great outfits. Everybody had stepped it up, wearing their best Seattle rain street fashion. A lot of nice rubber boots and some lovely embroidered hoodies.

Sadly, I missed both the Fantagraphics and ShortRun parties, but that's pretty much because Roberta and Linda and I ended up both nights at Roberta's,  talkinga and sharing stories and eating leftover Hallowe'en cakes, shortbread skulls and drinking blush wine.


Considering the long drives and shopping I have to make both ways, and the intensity of ShortRun itself, it was just as well. And a lot of fun!Of course, everybody was well aware of the presidential election, and one girl showed up with a hat I had to get a photo of. You gotta love her wry expression as the Gringette agrees with the sentiment.

Posted by Donna Barr at 1:42 PM No comments: