NOT JUST A RIVER IN EGYPT - BRIDGED 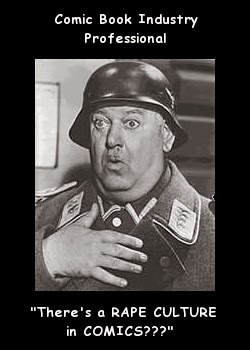 However, I'm modifying this report, because as I've posted this, the guys in our industry have raged defensively against how women and girls are treated, and demanded to know where it's happening, so they can defend their colleagues and fellow fans.

If this has made everybody so touchy they simply will not tolerate the abuse, whether on the internet or in business practices, our work (and I mean other comics professionals who have been demanding and pursuring action for years) is done.

Or at least the Bridge of The Geese had been built for the boys.

BUT - from what I've seen of the industry response from the boys, in reality, for any problems with the hard cases, I'm calling the cops or the ACLU. I'd just as soon not be told, again, to suck it up like the black people do. No, I'm not kidding.
Posted by Donna Barr at 12:34 PM 2 comments:

Calling the Cops on Conventions

"I don't know if you remember my reporting some fan who was threatening to infringe on me and my table for the Emerald City Comicon convention, but you fine folks said, "Call us and we'll come a-running!" Your "Costumes are not Consent" posters are a beacon for everyone in our society, not just our community.

As you know, many women and girls in comics and other media cannot post on a forum, write a review or work with men in comics, without being called "bitches," "whores" or threatened with rape. For years, we've all been subject to some level of this abuse, from the mild to the full attack. Nobody listens to us.

Recently, a bunch of fan-boys began to lie about me, in an attempt to frighten and isolate me, as they've done so many other women. Those of you who know me are probably thinking, "No good can come of this."

However, I think it will. Bad things happen to me so I can fix them. If I'm bothered by these people at a convention, I shall simply call 911 and report "assault" - because that's what harassment is. I don't care if it's a dumb fanboy who doesn't know any better, or an industry professional who SHOULD. Enough of this abuse.

And I'm sending a copy of this letter to the Seattle Police Department, and posting it on my blog, http://www.donnabarr.com

I doubt this will frighten Emerald City; they might welcome the backup."

And I did send it to the Seattle police, with a comment that I'm not asking for assistance now, but want to head off incidents before they happen. I've requested comments and guidance from the Seattle Police - and the best police know, and are proud, that they are public servants.

Dumb boys mess with my liveried servants, will they? They want costumes - they can have some REAL ones to deal with.
Posted by Donna Barr at 10:07 AM 1 comment:

Another great Emerald City Comicon. And, as usual, wore my Ka-Blam Tshirt, to show off who printed my lovely reprints of Stinz and the Desert Peach!

Does it get any better?

Didn't post a lot of photos of Emerald City, because they're all over the interwebs!
Posted by Donna Barr at 4:16 PM No comments: