It looked as though Webcomicsnation, hosting Afterdead, might have finally bitten the dust. Its original creator, Joey Manley, who sold it years ago, and who recently passed away, might have came back and kicked the servers, because it's back up.

In the interim, I've started it up again at Comicfury!

Head over to the first page of the latest episode, "Catching Hell,"and let me know you've dropped in.

Since it's hard to post new stories, rather than episodes, on Webcomicsnation - it's hosted, but doesn't look like much else is done - anything new will have to be at Comicfury.
Posted by Donna Barr at 10:57 AM 2 comments:

There are a lot of comments on this and other articles. I was going to put this cartoon in my snotty activist blog - which is what my home blog has become - but it's a cartoon and it belongs in my Art and Writing blog.

Cartoons speak for themselves. So here's my comment. I didn't color it or nothing. 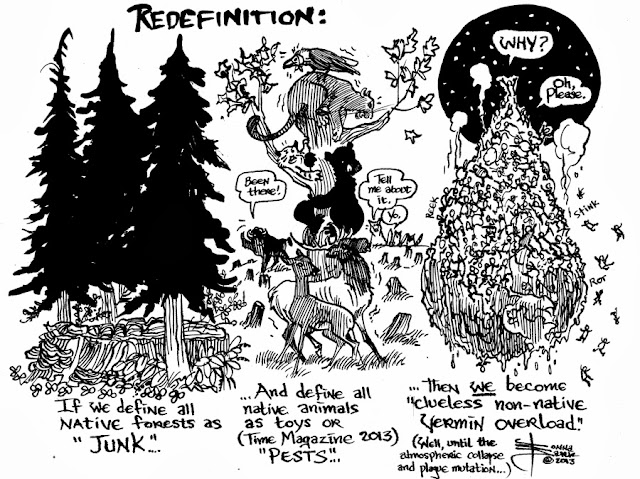 First of all, I'm going to be in Seattle For New Year's Eve. So if you have party ideas, let me know! I KNOW I'm going to a Sylvester or Hogmany party on the first. Hogmany is also known in Scotland as "People throwing up in the streets."

Now for the great art news:

Thank you, Caron Cadle, who worked with PanGaia Magazine, and found all the original copies in which "Rental Goddess" appeared. There are a whole bunch more of these, that I'd completely forgotten. Caron rescued a pretty funny story, about adventures with gods and goddesses, in a very reluctant life.

The original was in black and white, and I've thrown some color in here for a Winter Festival card. Enjoy!

Merry Whatever Rings Your Chimes!
Posted by Donna Barr at 6:16 PM 3 comments:

Thanks to Hitch Hikers Guide To The Galaxy for helping me ink. So let's take on three things at once. At least it will give the ink time to dry between pages.

Getting another AFTERDEAD page done, or at least the inks, on the left.

The forestry cartoon (right) is after this foolishness in Time Magazine. I've realized there's a dysfunction in the minds of the people who raise our food, and I'm getting them next. I'll post a better shot after I scan all this stuff.

If you're thinking, "My, that is a sparse and not-fancy art station," it gives me the chance to use this quote (of which I'm kinda proud, so there):

"I realized you don't to be magic or rich, or even completely wired down tight (in fact, it helps to be a bit off kilter to do this stuff), just be willing to actually do it.

"But one huge influence that paid off later was Donna Barr's "The Desert Peach". While a lot of artists I knew fussed about having the "right" tools, pens, brushes, a certain shade of ink, exact-weight paper harvested from the trees on the shore of a mystical lake in the Tibetan mountains, and other resources, I'd watch Donna Barr grab, literally, a ballpoint pen and a piece of paper and churn out her next comic chapter in a couple hours. Years later, in the Iraq desert, I remembered that ability to work with any resource and not to let excuses come between me and getting a project done. While I admit I prefer certain tools and resources, all I truly need is pen, paper, and lots of coffee."

Which always makes me happy, to know I've helped the next person sit down and start drawing and writing.


Stan Sakai's wife Sharon is under cancer treatment, and you know how artists raise money - we all chip in something pretty for an art auction. As Dan says, "You might as well be printing your own money."

Well, we don't have money, but we have art, so I did this little cartoon of a misunderstanding over what Usagi Y. had actually buried. I don't think Stan has any alligator characters (?), but gators are notoriously willing to take on any chance at a good thing. Here's the rough, and the final inks.

As you can see, I don't ink in roughs very neatly. I kind of get the generals down - in this case, after researching Stan's characters on the 'net - and then I light-table the inks quickly.

I've put the "WTF is going on here??" text in, upside down. I'm sure Stan will get it right away, but if not, this will make it a puzzle, and it's traditional to put in the answers on the same page, and upside-down. You'll note my little technique of getting the whole comics page into one gag by sorta telling the story with background sound effects. I think Don Martin did that too? I dunno; I'm sure I didn't invent it. They probably had it in Egyptian tomb painting.

And here's the pretty final, all painted up.
Posted by Donna Barr at 10:44 AM No comments: 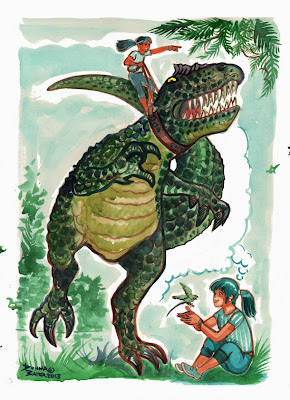 But now you can buy the piece of art at Deviantart, by going here.
Posted by Donna Barr at 4:57 PM No comments: