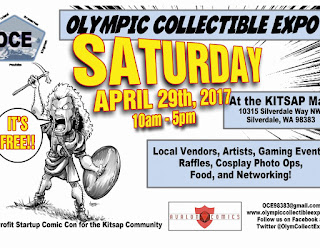 Hope to see everybody at the Olympic Collectible Expo on Saturday the 29th of April! Just think - with free admission, you can save your money to buy all the goodies at the show.

Here's all the information in a neat little postcard ('puters cut the edges off stuff - but you've got all the info, here).

It's a lot of fun. Good people run it, and it's the first multi-focus show in Kitsap. Yes, it's pretty superhero, but they were very welcoming to me last year. And they love goodies for their auction. Come see what goes up for bids! Including my very silly protest hat:

So treat yourself to the scenic trip on the Bremerton ferry, and run five miles north to the Kitsap Mall in Silverdale. Bring friends - free admission!

Lots of parking, too.


And now it's over, I can say I had a lot of fun, and met some old friends, and added new ones.

The horse hat ended up in the hands of Amy Bradley, and then promptly on her husband John's hat. They came out to help me out with my IdeaPad, that John got me in exchange for art - and because he can get good deals! To hold me until I budget for a new Mac and proper capability, someday.

Here's me wearing my Ka-Blam tshirt - which I wear to shows to to earn more printing credit from this great little print-on-demand company!

It turns out it was a mall show, so I have my choice - and I think I'm going to have to stick to the September show, which has its own room, instead of being in a mall. As nice as this show was, another dealer said, "Mall shows are just sad."

I wonder if they've considered the Bremerton spaces? How about the Elk's club? NICE big space and a stage! They could put on all kinds of presentations where everybody could watch them. Pretty good parking, too. Although the massive parking at the mall could be a deal-breaker.

There are some really nice ones - and PLENTY of places to stay. I can vouch for the Super 8 - not very fancy, but clean, quiet, great breakfast, nice staff and - SCALDING HOT WATER. Just right for a long hot soak after a long dealing day. Freeway noises blocked by a bank and trees. Oh, and nice discounts at the DQ and the Denny's, right next door.

I'm going to make up a nice sign that says, "Must leave by 3:00 due to driving daylight - make contact and purchases before then!" People are happy if they're kept in the loop. I liked staying at the nice hotel - but I'm within the State, and can drive home if I can.

More and more, shows aren't about sales, but about faces. Which this one was. And I may have helped a kid get into being a cartoonist. OOPS. I hope that goes well!

Posted by Donna Barr at 9:27 AM No comments: 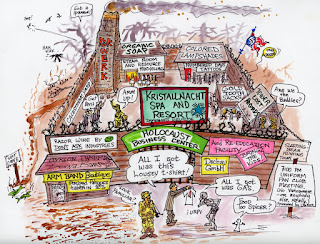 And I am, too. In honor of Mr. Spicer, who said Hitler didn't gas anybody. Not anybody white and soldierly, anyway, in HIS mind. You know how the uniform fan clubs are - they think anybody outside their fashion parade isn't human - or living. Or there for any reason except to feed the fan club. Part of that "It was made for you - so rape it" mentality.

It sat on my desk a while until I got to a scanner and it just got worse and worse. With the help of my social media friends, who I could almost hear giggling.

One of them, upon finally seeing it, called it "Pure acid." She was born German - so she knows where we're going. As a member of the most moral nation on earth, now, she's one among a people who have been trying to warn us off for years. But why would it work? We're the ones really attached ancient and awful human activities to modern industrial methods for profit goals.

You note the uniforms of the soldiers - there's a REASON a certain accidental president mistook summer-camouflage SS. Because now our troops look almot exactly alike. Still fighting for oil - and hooking up with the Russ empire if their masters have to.
Posted by Donna Barr at 3:33 PM No comments:

Sticks - because that' where we live.

Did these originally as a choice for Seattle's The Weekly. Click on it to see it larger. 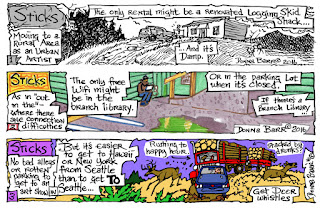 I soon found out, dealing with them as I did with a letter to the editor with the Peninsula Daily News, what happens if you make fun of the logging industry. Or even talk about how many tax deductions it gets.

They're both owned by the logging industry. You can hear the axe breathing down the editors' necks.

BTW, I've noticed the Logger Culture, and who pushes it. You folks in Seattle want to end up being made fun of the way Cowboy fans get made fun of? Back when cowboys were prettied up, it was an argument about why they were the Good Guys and the Indians were the Bad Guys. Loggers have chopped down two state parks out here, clearcut a bear's home next to Forks so hunters in Forks could kill him when he came out starving. Guess what tone the papers took about the animals and parks.

Hey, I'm not just picking on Sound Publishing. I just tweeted The Washington Post, and asked them who owns them. Jeff Bezos of Amazon, of course. Let's see - Amazon took shark-fin soup off their lists when their customers blew up over it. It's far more socially and environmentally responsible (no, it's not perfect - it's only human, and admits it). Guess which paper is doing better?

It's hilarious watching papers scrabble around blaming "distribution" and social media for their loss of content - when they're in a choke-hold by the industries they cozied up to just to survive. It's like watching "Mainstream" comics losing it over webcomics and what they still call "Indies." (It's 2017, people! Not 1989!)

Look, newspapers are at fault that the books in the Library of Congress are crumbling to pieces. Do I HAVE to make the connection to "Forestry?" You all know it.

So, enjoy the cartoon. And TradJourns? You're not fooling anybody.
Posted by Donna Barr at 10:27 AM No comments: