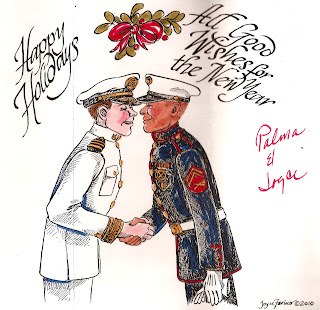 Joyce Farmer sent this lovely card for the 2010 Christmas, just in time for DADT to bite the dust.
Joyce has a new book out!  Special Exits -- life with Mom.
A great review of the book.
Posted by Donna Barr at 3:59 PM No comments:

How we used to do it.

A reader who posts her rather wonderful KrautGrrl art and stories (go look!) over on Deviantart sent me this little review, and gave me this permission to post it. First our little conversation about that:
Donna:  "I am so happy you like that! Did they get it from here? [link]

And I'd like to thank them for getting it for you! Which shop is it?
The book was written as a kid's book, but it's probably too much for most kids. I mean, it would have been fine for me, but most kids would probably not get it. I had a lot of fun with internal art puns, as I recall (couldn't point 'em out now)."

June: "Oh I would have loved it as a kid. And I have no idea where he scavenged it from. That shop is crammed full of so much -- and I didn't think to ask but I shall next time I see them.
It's called "Buried Under Comics" in Manchester, Connecticut."
And now the review:
"So... while it seems unlikely I'll find anything peachy in my stalking or under the tree -- my good friends at the comic book shop remedied this.
The Grandmothers' Hive ... I don't even...know where to start O_O
gah it was like some sort of whimsical trip minus the anxiety of waking up not knowing where I am.

I mean...in everything!!! the story, the words, the text, the pictures! I had to re-read the pages several times to soak everything in...

it is utter eye candy...

I could go on and on about how much I enjoyed this work but well...I realize I must pester you so often with my fan-girling...

point is... it's the best Christmas present I could have hoped for.

Marvelous Work, as always."
Posted by Donna Barr at 11:46 AM No comments:

Letter to the magazine Astronomy:
"Twilight Musings in the January 2011 Astronomy reflected why our household finds the sunset hours so fascinating, especially the cut line "We commonly wait to view Earth's shadow during a lunar eclipse, but it also appears projected against our atmosphere any transparent night."  The shadow of Mauna Kea on the atmosphere made me shiver.
We are -- and probably always will be -- on a giddy, ancient or kid level of astronomy:  identifying bare-eye objects, oohing and ahing at the Milky Way, tracking planets.
In August 2010, walking on the beach on Clallam Bay, on the Washington State's Olympic Peninsula, we saw on airplane over the beach.  Or an oncoming helicopter?  Something too large to be a star or planet, at least not there.  As it lowered winking angrily red and green against the silvering sky, we realized it was much farther out than any man-made object.  Racing back to the house, we grabbed our astronomy texts, and soon identified it as the binary system Al Ghoul, or The Head Of Medusa, in Perseus.
Its powerful appearance as its rising, with nothing else visible in the sky, made us realize why the desert peoples called it "The Demon."  As you can see in the photo at http://www.sekiu.com, the ridge we live behind blocks low-level objects.  We're used to seeing Perseus as a pretty but not spectacular overhead winter constellation.
(Has anybody at "Astronomy" tried my experiment of running down a hill at a green flash to intensify the perceived color?  It can be replicated as a sun sets, allowing anyone, kid or adult, to see a green flash over and over. Admittedly, that might be pushing playing with science a bit far.)."
Posted by Donna Barr at 10:19 AM No comments:

After Definitely Not The Opera put out a call for rescue stories, I wrote this one, and I might as well put it here:
"I've never been rescued, but I've rescued others and their lives and limbs many times, including myself, people, animals and at least one horse.  I don't know why this is: I seem to have inherited my father's lightning-fast reactions when there's an emergency, and only panic when the incident is over and everybody's safe.

One rescue disturbs me because it was of a child when that boy's parents should have been there to watch over him.  I was splashing around in the warm, calm waters of Belfair beach at the very end of the Hood Canal, near Shelton, in Washington State.  I noticed a small blond boy picking his way along one of the small oyster-shell island, accompanied by a little Asian girl, both of them in bathing suits.

Belfair Bay seems very safe, but there is a First Nations tale about a witch that eats children there, and I think it must be based on the tide, that comes in very fast over a wide, flat bay, filling in deeply through one or two deceptively shallow-looking channels.  Some of the mud is like glutinous quicksand, dangerously deep for a child.

I was splashing around happily in the rising water when I looked up to see the boy balancing on sharp oyster shells, with a look of panic on his face.  The little girl was trying to get him to cross the fast channel.  She could swim, he couldn't.  There was no way he could have gotten back across the island in time before it was covered.  She was going to have to watch her friend drown.

I waded and swam over to the poor kid, and told him to hang onto my waist and not to panic or let go, no matter what happened.  He was very brave; even though I could feel him shuddering with terror, he just hung on tight as I swam us both back, the girl darting through the water ahead of us.

When I got them back to the beach, I told them to tell their parents to NEVER let them go to the beach alone.  And to never do it again, no matter what.  When they nodded, they seemed to mean it.  Last I saw of them, they were heading back over the ridge to the trailer camp where they were staying with their parents.  I probably should have gone over and had words with their folks, but it seemed like talking to the kids was going to have better results."
Posted by Donna Barr at 6:38 PM No comments:

Getting Around The Censors

Facebook forum on the censorship of one man's book by Createspace (ask him for details, see if you agree).
Posted by Donna Barr at 9:24 AM 2 comments:

Even though I can't read the long and obviously complimentary reviews that keep showing up.

However, if you paste this link into the SEARCH space of your browser, it will take you to a Google search page with a translation link!

When you read it, please remember that fućkati is evidently the Croatian word for "whistle."
Posted by Donna Barr at 8:36 AM No comments:

I CAN be hired

I love my agents.  Letter from me to Dave Baxter and Dallas Miller, of Killing The Grizzly.

"Hi, D & D:
I would like to extend a huge gift to my fans, but I want to ask you first.  You know how Gene Roddenberry allowed anyone to sell any Star-Trek-related things they created themselves?  I'd like to do the same with my work.  Not the old stuff you're representing -- anything THEY make, new and pretty.  I'll let you hyperventilate for a bit, and then get back with me."
Dave Baxter:
"Hyperventilate?  Hell, no, that sounds fantastic.  I mean, personally, I think every creator should pirate their own work and stick it out on torrents and forums and P2P sires.  Anyone who downloads the work there and reads it on a computer (un-ideal) wasn't going to give you money anyway, either due to not having any money or just being a stubborn ass, but either way I don't believe you actually lose anything and you gain word of mouth and exposure.
Creator-approved fan-fic (even for profit) is a profound idea, and can do nothing but good.  It's free marketing and reader engagement for publishers, too.  On paper they all have to poo-poo these kinds of ideas, but if they're already in motion.... :)
Dave Baxter (of Dave Baxter and Dallas Miller, of Killing The Grizzly).
So there you go, folks.  Go nuts.  Send me stuff (email files, copies, links) to read or enjoy.  Sell it without worrying about paying me.  Invent new characters, whatever you want to do.  It's a big desert out there (and Gene was usually right).

Cool Facebook Thread about this.
Posted by Donna Barr at 9:41 AM No comments: 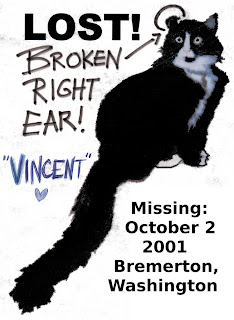 It's time for the yearly "have you seen this cat?" notice.
Yes, I know, cats have been found after 14 years because they were microchipped, but Vincent wasn't.  But now we have Facebook.
A cat psychic doing a reading at the time said someone stole him and that he died trying to get back.


Update:  The following psychic reading December 9, 2010, by Animal Communicator Hilary Renaissance
"He saw a woman with her hair in a bun or ponytail who was carrying groceries in a bag into a 'medium-colored' (brown/green/even light red) building."
"It was within three homes of yours (in Bremerton). Then he saw something near the building. He saw some milky-colored cat food and he ate some."
"He became sick, and felt like hiding. He went into some bushes, somewhere between your home and bushes. There was a recessed area, or alcove under a deck or a porch, or even under a foundation. The bushes had a slight arch. The leaves were like plumes, and slightly arched. Possibly ferns?"
"He was in and out of consciousness. He didn't physically travel, but cats can associate travel with bad things. He didn't go anywhere physically. Then he crossed over."
"He says he feels like a star. You made him feel like a star. You can stay in communication by doing something good. Plant a tree, write a poem for him. Making him a cat bed would be an excellent idea."
Homeopathy (prescribed for grief): St. Ignatius Bean. Take 1 drop ever 15 minutes for an hour, then twice a day for 60 days to help make the grief flow out. Drop one pellet in a gallon jar, put in pet's water, refresh daily.
Immediately upon hanging up the phone, I put out a folding chair, and an afghan I'd crocheted, that he'd known and slept on.  Fearless -- whom he'd known and slept with -- and Kiki, whom he didn't, got into a squabble over the chair.  Then Fearless came back and snuggled down in the chair.
The weird thing is, for months afterwards, I kept wandering near that house, feeling something pulling me.  I have no doubt the body was removed.  Other cats disappeared in that neighborhood, too. Now I know why we hope there's a Hell.  I'd look for a homeopathic medicine for grudges, but when we're part Irish, those don't do any good.
Posted by Donna Barr at 12:25 PM No comments: