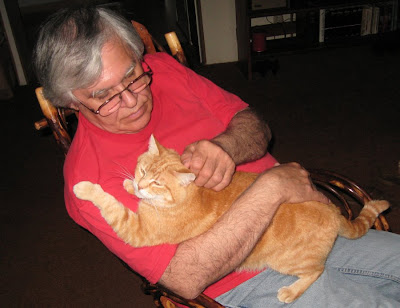 I Don't usually share family details, but since I'd blogged about Simba, I thought I should inform those kindly friends who wished him well:

Poor guy; about five years old. When we first met him as a half-grown kitten he was following the red-headed Hat Boys (a group which included their sister and a Makah kid). On the beach. He stopped to get petted, and then scrambled down the log to follow his gang.

He spent his young life in a here-and-there household situation between a couple houses, tagging after kids who were good to him, including him in trips to the ville and football games. They hauled him around like a doll, and he looked happy. Then he disappeared, and everybody thought he was gone.

We figured later, he'd just moved down the road to do some tom-catting with the woods cats.

A couple years ago, in April, he came to us for help, thin, faded to pink, claws ripped off and hide covered with wounds from constant fighting. We have a policy: if there's a human attached, we don't adopt. But Simba was really alone, and desperate.

We fixed him and fed him, and he found a warm place on the couch and in front of the wood stove. He began to play with our other cats, and claimed Dan's lap for his own. He had a really loud purr. His color came back, turning him into a fine red bull's-eye tabby.

But the tom-cat life is a rough one. Simba developed health problems, and we realized he was going to be a Chronic Cat. Chronics don't thrive. We were preparing ourselves. I won't go into details of the last illness.

The Simbanator was fat and happy while he was with us, and he was Daddy's cat.

And on this Christmas, did he ever get totally baked on catnip.
Posted by Donna Barr at 9:00 AM

There's no way to express the feeling of losing a loved pet, but from what you wrote, its clear Simba had a loving home and he was well cared for. May his little soul be resting, and purring in catnip heavens.

It looks like Daddy was Simba's human, too. There is nothing like a big red tom cat.

Here is what my late, former yet well loved husband said for cats who were ill or had bid us goodbye, the language differing a little with each situation and cat:

God bless all pussycats
And keep them safe and warm
Especially those who are in heaven.
Give them a safe path to the Rainbow Bridge
And if there is no human there for them help them to find one
And especially bless Simba and give him
lots of mice to chase and catnip and comfortable places to sleep
and friends to snuggle with
and let him watch over the humans who watched over him in life. Amen.

my condolences, there's not much worse than losing a lovely feline friend, especially a large and happy ginger one... mine was named "kitten" and saw me through many a horrid teenage year. perhaps they are together somewhere getting baked on catnip and purring their little afterdead hearts out!