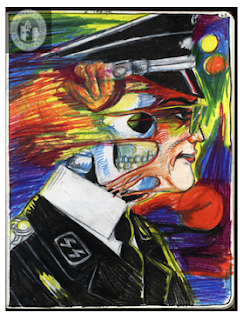 My "Black Manuscripts" have been released by the San Diego State UniversityLibrary's Digital Collections.

The twelve ornately-written and -drawn art manuscripts date from the mid-1970's, when I was drawing and writing for my own pleasure, as a self-taught artist and writer.As is often the case for girls of the time, no publication was ever intended. But this work led to my becoming the published author and owner of such classic comics series as "The Desert Peach" and "Stinz," after I was discovered by Lex Nakashima and Steve Gallacci, and published by Eclipse Comics, then Fantagraphics, and Aeon Press, among others.

The full collections are viewable for reading at SDSU's website, here.

Here's a flip through one of the books (I'd suggest being a bit more delicate, dear - the glue is getting old!)

More postings of the recent visit by students to see the books (on Facebook).

Each manuscript is covered with beading, quilting and embroidery. The subject-matter reflects my early interest in the German military - an interest that is now shared by many girls in comics, especially after the introduction of the theme in Japanese Manga. These books led to my study of politics of the time - and the way society actually treats women, peoples of color, the LGBT community, and the Jewish people, as well as the natural world - that now informs all my work. I didn't get it right in these books - but I was starting to learn.

The project has been in the works for over a decade. Fans of my work have been very happy that this early, unseen work by one of their favorite authors is now available. The art is also available for art studies, especially in universities.

Huge thanks to the whole crew at the San Diego State Library's special collections crew, and all their fine work! As you can see, the art was degrading - and they've saved it for all to see!

Here's a flip through one of the books (I'd suggest being a bit more delicate, dear - the glue is getting old!)
Posted by Donna Barr at 1:24 PM