(Photos with my new smartphone; it doesn't take as good a picture as the IPod - my apologies).

Opttacon is over for another year, and I'm already planning for next year. As a Drawn Book author, I have some good news. This year there were THREE drawn book tables.


These first couple of shots are of course of me wearing my Ka-Blam shirt. They give me $10 print funds every time I do this and then put it up on the internet.


The next shots are of my good friends at small comic powerhouse, Pugmera Studio. You'll find their good stuff on Instagram!

They are so together - that screen is just an old television hooked up to a PC laptop. They're fun happy folks, and very supportive of all the shows and drink and draws in Port Angeles. 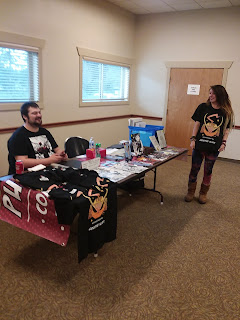 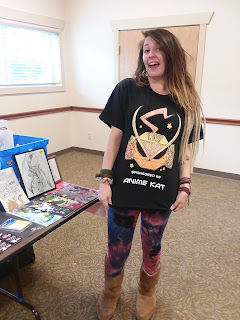 Here is Maureen Heaster, and her adorable book "Hurdles," about dog relay-racing. She draws and paints wonderful cats, too.

I suggested she do abook about CAT relay-racing and her eyes lit up. At first she thought that wouldn't be possible, but I told her to look up Russian Cat Circuses on YouTube. Cats will do anything for cold-cuts. Who knows what she'll have at the next show?

All of us have been vendors at the Forks RainCon. It's getting to be quite the little nerd network out here!

Last year, Roberta Gregory and I were at one table. From three tables to one- that's a 200% jump! And next year, I'm very honored to have been asked to design the tshirt, so I'm in for 2020.

No, it's not making a lot of money for comics people yet - but that will come. We're dropping dinged copies into $1 boxes at Anime Kat, to build a market. I'll have to try that at local bookstores, too.

Jeff Tingelstad, who runs Opttacon, found this nearly pristine collection of The Dreamery on ebay, and dropped it on my table. What a lovely surprise. I will make sure it goes to the San Diego State Special Collections.

Gaming runs late at night, as an entertainment venue. Comics run during the day as a trade show. Opttacon seems to be making it work.

I've still to figure out how to make optimum use of my travel time but I think with the help of Toadlily Hostel in Port Angeles, in 2020 I'll be there for the right hours.

Speaking of Anime Kat, here is their boss, Drew. A very together guy and a lot of fun! Anime Kat is nerd central for the Peninsula. Manga, games, general fun.

Penumbra says there are great drink-and-draws at Studio Bob on Front street. I suggest you contact them on Instagram - and follow them and ask for full details.

I had to get home early on Saturday, so I missed the Tardis extravaganza planned by the co-splayers. I hope that happened! I'm kind of part of the semi-official find-the-cheap-costume-parts team.

Cherry-picked Games, that make my favorite game, Conspire. I still want to get my fans together and punch my characters into the game. I'll bet it would work.
Gotta show the Opttacon table itself, covered with donated games for the win contest. Since I had no game to donate, I grabbed the $5 day-old box at Num-Num Donuts. Eveyrbody likes donuts with their games! That's Steve Strout standing guard. Opttacon bought pizza for everybody the first night. 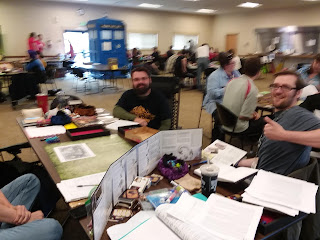 And now: OPTTACON! In all its geeky glory. 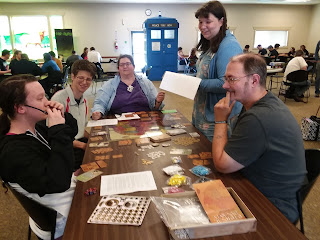 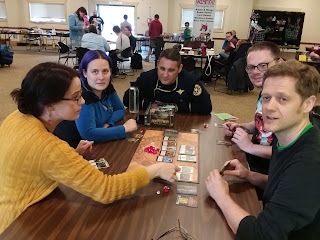 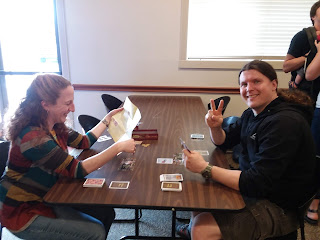 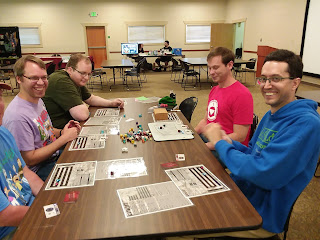 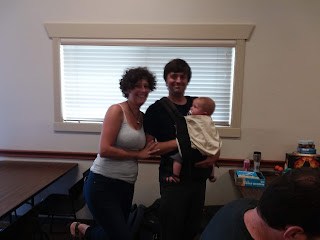 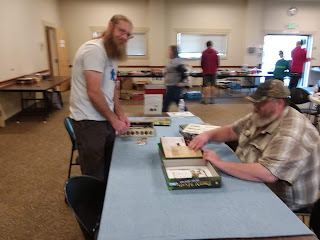 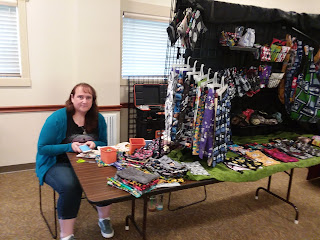 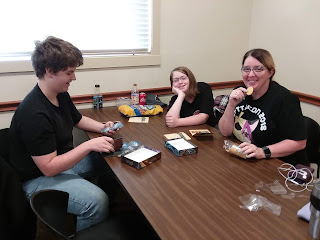 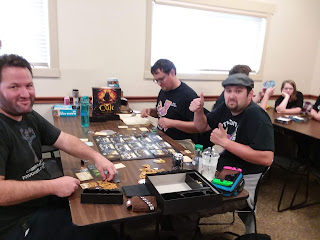