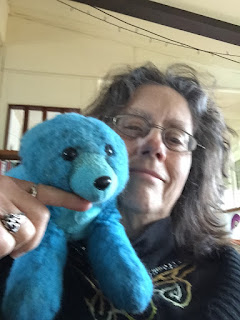 Bluebear was found in the mouth of the Clallam River, torn and dirty and stuffed with chopped Chinese newspapers. One look at that little face, and we couldn't treat him as mere beach garbage. We could do better than that.

I skinned him out on the spot, dumping his guts into the beach garbage, and washing him as best I could in the river. He went home with us as a blue bear pelt.

Once at the house, he was washed and re-stuffed, and dubbed Bluebear, as a holding name until we could think of something better. But it turned out to be like Brad Bird's turn as Edna Mode - it stuck because it was right.

Bluebear has since traveled with me to Emerald City, and now - Norwescon. At Emerald City, he only came out for the fun stuff, the travel and parties. Norwescon is more of a fan convention, so I got shots of him with just about everybody.

Everybody was delighted to pose with him, when I asked them to "Hold my bear."

We end the first photos with a shot of Bluebear back home, with fellow plushie Rudy, and real cat Kiki. And then we throw in all the rest of the fun.